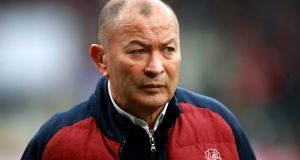 Eddie Jones has admitted he cannot predict the impact of the coronavirus pandemic on his England set-up. File photograph: PA

England coach Eddie Jones says he did not hesitate to agree to having his temporary 25 per cent pay cut made permanent as the English Rugby Football Union (RFU) battles to deal with a financial crisis brought about by the impact of the Covid-19 pandemic.

Australian Jones is the highest-paid international coach in the sport and in March agreed to a temporary cut in his reported £750,000 salary, as did CEO Bill Sweeney and other senior staff.

This week that became permanent as the RFU revealed a potential revenue shortfall of over 100 million pounds over the next year and a plan for 139 redundancies.

“I don’t think it is any grand gesture by me. I was asked to do it, I understand the situation,” Jones told a teleconference on Thursday. “Sometimes you have to make sacrifices. The sacrifice I am making personally as compared to some other people are making in sport and society is negligible.”

The former teacher said he once worked unpaid for three months at a struggling school which recovered from closure to become one of the most prestigious in Sydney.

England’s players are also likely to face cuts in their £25,000 per game match fees but Jones said that, and other financial pressures that could impact his usual money-no-object preparations, just had to be dealt with.

“I think you’ve got to keep everything in perspective with what’s happening in society,” he said. “It’s a difficult time for sport and we’ll just have to adapt and that’s part of the challenge for everyone at the moment.”

Jones is also likely to have to adapt on the hoof as he begins to prepare for England’s November internationals. It is still unclear whether the original opponents - New Zealand, Australia, Argentina and Tonga - will travel, with alternative games against European opposition still in the mix.

He also has the postponed game against Italy in Rome to factor in, where victory could well secure the title in this year’s interrupted Six Nations Championship.

“The thing about this situation now is that every team is going to start at zero, whether that’s a club team or an international team,” he said. “Whoever prepares the best is going to prosper.”

Jones said that he gave Manu Tuilagi “a small piece of advice” as the centre contemplated a move overseas from Leicester that would have ruled him out of England selection. Tuilagi eventually opted to stay in the Premiership with Sale. “He knew what he wanted to do,” Jones said. “His performance in the World Cup and the Six Nations indicates that there is still more in him so I’m delighted by his decision.”