‘You can’t impose, really, obligations on people who are only two weeks old’ 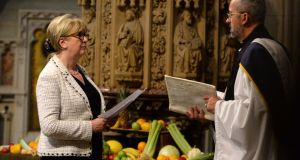 Babies baptised into the Catholic Church are “infant conscripts who are held to lifelong obligations of obedience”, according to former president Mary McAleese.

Saying that early Baptism breaches fundamental human rights, she said: “You can’t impose, really, obligations on people who are only two weeks old and you can’t say to them at seven or eight or 14 or 19 ‘here is what you contracted, here is what you signed up to’ because the truth is they didn’t.”

The current model of Baptism “worked for many centuries because people didn’t understand that they had the right to say no, the right to walk away”, she declared.

“But you and I know, we live now in times where we have the right to freedom of conscience, freedom of belief, freedom of opinion, freedom of religion and freedom to change religion. The Catholic Church yet has to fully embrace that thinking,” she told The Irish Times.

She said conscience was “supreme” where Catholics were concerned.

She said many things down the centuries were taught “with great passion that quietly now have been abandoned by the very magisterium that taught them”.

She instanced examples such as its condemnation of Gallileo or, more recently, the description in 1930 by Pope Pius XI of those who advocated emancipation and equality for women as “false teachers”.

Mrs McAleese said she did not intend to attend any World Meeting of Families events in Dublin in August because it had “become a political rally rather than a religious and spiritual experience”.

The meeting, which will be attended by Pope Francis, is a forum “for the reinforcement of orthodoxy”, she said.

She will, however, be taking part in the Dublin Pride Parade next Saturday “under the BeLongTo banner” and with “the members of our own family, straight and gay, young and old, we’ll all be there”.