Tickets for Pope Francis events in Ireland on sale from Monday 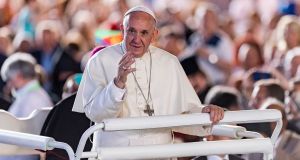 Tickets for the Mass to be celebrated by Pope Francis in Dublin’s Phoenix Park on August 26th will be available online from Monday.

Ticket numbers are limited to 500,000 for the Phoenix Park. The tickets, and those for his visit to Knock that same morning, will be available at worldmeeting2028.ie from Monday morning.

The Phoenix Park tickets will will have to be printed by the purchaser to help defer costs, while the 45,000 tickets available for Knock will be printed and posted out to successful applicants by July 31st.

Times of availability online next Monday are not being published. “We’re not giving out the exact time, for all sort of different reasons,” World Meeting of Families 2018 spokeswoman Brenda Drumm said.

“Tickets for both Knock and the Phoenix Park will go live at the same time,” she said, but “it will not be possible to attend both venues”.

When booking tickets, people will be invited to make a donation to help with costs of the event but this is optional and will have no impact on a person’s access to tickets.

Where tickets for Knock were concerned, those booking “must give an email address and details of where they will be travelling to Knock from on the morning of the 26th of August,” Ms Drumm said. These will be used to prepare the overall transport plan for the day there.

Tickets for Phoenix Park will be “print at home” and “will also be issued by the 31st of July,” she said. Where older people were concerned, or where there might be problems with access to the internet, she said “we have asked parishes to help us out there”.

Strict traffic management will operate in the Phoenix Park, with all routes colour coded. Ticket holders will have access to a single route and gate which will also be their exit.

“We’re asking parish groupings and large groups in particular to access their tickets for Phoenix Park via our grouping system,” Ms Drumm said. “We are saying to people now, please think about your journey, please plan your journey and the type of transport you are going to use on the 26th of August.”

She referred people to the gov.ie/popeinireland website where there will be a full transport plan in place for Knock and the Phoenix Park on the day.

World Meeting of Families general manager Anne Griffin said registrations for the Pastoral Congress at the RDS in Dublin on August 22nd, 23rd, and 24th were “over 34,000”.

Of those, 27 per cent of applicants were under 18 with 62 per cent under 50. “So we really are talking about young people, families, young families, which is exactly what we hoped,” she said.

More than 10,000 were from abroad, involving 114 countries “and we are still seeing registrations from overseas coming in each day”.

More than 6,000 volunteers had registered to date. “We now have a call out for an additional 4,000 volunteers to work with us for one day in the Phoenix Park,” she said.

The event’s secretary general Fr Tim Bartlett paid tribute to the statutory agencies “who are collaborating very closely with us in preparing the logistics around these events . They have been simply outstanding and I am in awe and in gratitude of their professionalism.”