Cork native, who will replace Dr Michael Smith, was previously based in Diocese of Cork and Ross 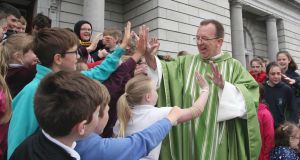 Canon Thomas Deenihan, who has admitted to suffering many sleepless nights since he was informed of Pope Francis’s decision. Photograph: John McElroy

Pope Francis has appointed Canon Thomas Deenihan, a priest from the Diocese of Cork and Ross, as the new Bishop of Meath.

Canon Deenihan will replace Dr Michael Smith, who submitted his letter of resignation to Rome three years ago.

Speaking following the announcement of his new position, Canon Deenihan admitted to suffering many sleepless nights since he was informed of the pope’s decision.

“There is an acute sense of being unworthy for the task, the enormity of the task and a deficit too in local knowledge – be it geography or personality,” he said.

“I always had the view that the Diocese of Meath has a unified and a talented clergy and younger too than many other dioceses. That must be a blessing. In the weeks and months ahead, I look forward to meeting the priests of the diocese and visiting the various parishes.

“Those parishes could not survive either without the work and expertise of the laity who live in them and give of their talents willingly and freely. I look forward to working with those people into the future and benefiting from their expertise, commitment and talents in supporting the diocese, particularly in the areas of education, finance and safeguarding.”

Canon Deenihan thanked Dr Smith for his welcome, advice and leadership in the diocese. “Even for those of us outside the diocese, there was a sense about him of a father figure and a bishop who was close to his priests. I hope the same will and can be said of me when my time comes.”

Canon Deenihan was born in Blackpool in Cork city in 1967 and studied in the national seminary of St Patrick’s College in Maynooth.

He worked in the parishes of Glanmire, Schull, Kealkill and Bantry and taught in St Goban’s College. He has a masters and doctoral degree in education and was appointed as diocesan adviser for post primary catechetics in 2003. In 2006 he was named diocesan secretary and diocesan education secretary.

He also served as general secretary of the Catholic Primary Schools Management Association and is the acting executive secretary to the Council for Education and to the Commission for Catholic Education.

Bishop of Cork and Ross John Buckley described the newly appointed bishop as a man of “strong faith, good judgment” who was “very committed to his priestly duties and fully realising that our lives as priests can only be sustained by prayer”.

In the area of education, he said Canon Deenihan was one of the “most experienced and highly qualified priests in the Irish church”.

“As his bishop, I am very grateful to him for his knowledgeable and respectful service to me and to the diocese. I wish Canon Tom every joy, blessing and happiness in his new role as Bishop of Meath.”