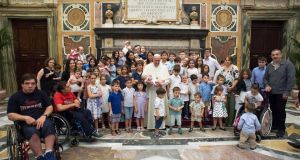 Pope Francis meets the Forum of Family Associations in the Clementine Hall at the Vatican on Saturday. Photograph: EPA

A Catholic lay group has sharply criticised Pope Francis after he said only heterosexuals could form a family in the eyes of the church.

“It is painful to say this today: people speak of varied families, of various kinds of family” but “the family [as] man and woman in the image of God is the only one”, Pope Francis said in unscripted comments last weekend to a gathering of Forum of Family Associations, an Italian lay movement representing Catholic families.

We Are Church said it was “appalled and alarmed” at the Pope’s comments, as reported by Italian news agency Ansa.

“This reinforcement of anti-LGBTQI attitudes and the refusal to recognise LGBTQI families as true Catholic families by Pope Francis will be treated with incredulity and dismay by the Catholic faithful,” the Irish group said.

Pope Francis will visit Ireland in August for the church’s World Meeting of Families.

At the weekend, former president Mary McAleese said she would like to see the Catholic church “stop hurting” LGBTQI people and women.

Speaking at a meeting of We Are Church, she said she hoped the church would instead become “a champion of complete diversity and inclusion”.

Ms McAleese also told the meeting she had voted in favour of repealing the Eighth Amendment and had no intention of going to confession about it.

Two bishops – Bishop of Elphin Kevin Doran and Bishop of Waterford Alphonsus Cullinan – have suggested that Catholics who voted Yes committed a sin.

Such people “should talk to the priest, they should go to confession” before receiving communion, Bishop Cullinan said.

1 Tyrone midwife on the cover of Vogue magazine
2 Mother of three (41) who had to fundraise for her own cancer treatment has died
3 Barack Obama urges those protesting in US to seize the momentum
4 Luke ‘Ming’ Flanagan bares his bottom half to European Parliament
5 Covid-19: Varadkar downplays expectation of accelerated lifting of restrictions
Real news has value SUBSCRIBE