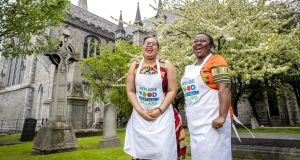 Hundreds of refugees and asylum seekers across Ireland will meet on Wednesday to mark World Refugee Day through a celebration of food.

The Refugee Food Festival, which began last week and is inspired by similar international food festivals, will see 17 restaurants and food businesses offering opportunities to refugee and asylum seeker chefs and bakers to show off their skills.

The main event of the festival will be held in St Patrick’s Cathedral on Wednesday evening where 280 people living in direct provision centres will gather to mark World Refugee Day, among them Zimbabwean chefs Vuyisile Mbangiwa and Sinqobizitha Mguni.

The dinner will be attended by former president and UN high commissioner for human rights Mary Robinson.

Also in Dublin, a young Syrian pharmacy student who set up his own falafel shop in the Greek refugee camp where he lived before coming to Ireland, will be cooking in the Guinness Storehouse Season’s Restaurant on Tuesday and Wednesday for visitors.

Jess Murphy, chef at Kai restaurant in Galway, will cook in Cork with residents of the Kinsale Road direct provision centre, while on Thursday Mabel Chah from Global Kitchen will be cooking in Café Rua in Castlebar, Co Mayo.

Michelin star restaurant Heron & Grey in Blackrock will hand their kitchen over to three Syrian chefs for a pop-up dinner for chefs and restaurant owners next week.

Jody Clarke from UNHCR Ireland says the festival’s focus on food stems from the tradition of communities sitting around a table to share stories and ideas. “It goes back to the old saying of breaking bread and meet new people.”

He added that St Patrick’s Cathedral also has a tradition of welcoming refugees dating back to the Huguenots (French protestant refugees) who were offered shelter in the Cathedral’s chapel when they arrived in Ireland in 1663.

The Dean of St Patrick’s Cathedral, the Very Reverend Dr William Morton, said the church should act as a place for “welcome, friendship, openness, acceptance and inclusiveness” to those seeking asylum.

“We believe that those who come to Ireland should receive the welcome that we would like extended to us when we venture abroad, bearing in mind a long history of migration and emigration from these shores,” he said.

There are currently 25.4 million refugees around the world with more of half of these coming from South Sudan, Afghanistan and Syria with another 5.2 million coming from Palestine.

A refugee is someone who has been forced to flee his or her country because of persecution, war or violence. Most likely they cannot return to their home country or are afraid to do so. An asylum seeker is a person who has applied to a country for declaration as a refugee. There are an estimated 3.1 million asylum seekers worldwide.

There are 5,375 asylum seekers living in direct provision centres across Ireland.

*This article was amended on Thursday, 21st June as a previous version incorrectly statedVuyisile Mbangiwa and Sinqobizitha Mguni were Michelin star chefs who cooked the food for the St Patrick’s Cathedral event.