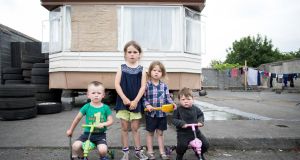 A north Dublin Traveller site, described by a local authority as “among the worst in the country”, cannot be made more habitable as council staff have concerns about entering due to health and safety issues relating to “a minority of residents”.

St Mary’s halting site in Cappagh was opened by Fingal County Council as a temporary site 18 years ago. It is now home to 14 families, including more than 40 young children, who are living in dirty, hazardous conditions, without secure electricity, secure running water or anywhere safe to play. It is infested with rodents.

While some bays have cold-water taps, none of them appear to have shower facilities and families share porta-loos. Wires trail from outdoor electricity sockets – in some case three plugs feed from one socket – across tarmac to several mobile homes at a time.

On May 22nd a family’s mobile home was destroyed by fire due, according to its owner William McDonagh, to overloaded electricity. Little is left of the burnt-out van, the ashen shell of which remains in the bay.

Mr McDonagh (36), a father of four children aged 10-16, who is separated from his wife, said because he was now “homeless”, his children could not come to stay. They live in a group housing scheme in nearby Finglas.

“Luckily they weren’t here when it went up in flames. I was in my parents’, across in their bay, when we looked out and saw the fire late in the night.”

His request to Fingal County Council to borrow money for a new home under its caravan loan scheme has been rejected.

The council said he has had two loans already, in 2004 and 2015, for caravans and now owed more than €18,000. In a letter, the council’s caravan loan committee told Mr McDonagh it had received no repayment, agreed at €20 per week, since March 2016.

He has also been advised that due to “disruptive and/or violent behaviour” at the council’s Blanchardstown offices on May 25th, he “may not present to the council offices except by prior arrangement for . . . 12 months”.

“As you are aware it is difficult to regulate the electricity supply to the . . . units in St Mary’s as, in many cases, the electricity meter has been bypassed . . . It is also regrettable that contractors who are engaged by the council to fix these electrical connections have had to leave the site on several occasions due to intimidation/volatile behaviour,” the council said.

Mr McDonagh agreed he was “not allowed at the council” but said he could not see how anyone felt intimidated as anyone he spoke to was “behind a glass window”.

He acknowledged his debts with the council were outstanding, but said he was now homeless due to the fire.

We’ve heard so many promises. Vincent Browne has been here. Ministers have seen it. Nothing happens

Asked if he could purchase his own van, Mr McDonagh said he sustained a head injury in a shooting in 1995 and could not work. He can neither read nor write having left school when he was “11 or 12”.

As we speak children aged between two and six splash plastic spades in filthy, oil-stained puddles, in a littered bay marked “Play Area”. There are no swings, see-saws or children’s play equipment. Large, overgrown weeds are everywhere. Broken-down walls are scarred with graffiti.

One mother, who asked not to be named, said she had “given up” on the site ever being made habitable.

“We’ve heard so many promises. Vincent Browne has been here. Ministers have seen it. Nothing happens.”

“The residents there are very frustrated at years of promises the site would be redeveloped. Their children are still there in awful, awful conditions. If there is anti-social behaviour, the council has to deal with that. There are procedures to do that.”

A spokesman said council staff were also “frustrated” with a lack of progress on improving St Mary’s.

“It is unfortunate that a minority of residents who engage in bad behaviour on site are difficult to deal with formally through the warning or eviction process.”

Other residents have not made formal complaints “in relation to unacceptable behaviour or intimidation”, he said.

“Efforts to deal with this will continue. The determination of a licence or tenancy is not straightforward and significant evidence is required to successfully prosecute such an application through the courts.”

He said the council operated many Traveller sites successfully and had committed €500,000 to improve St Mary’s. The council wanted to install new “day units” with kitchen and washing/ shower facilities and a procurement process was under way in partnership with Dublin City Council.

“It is hoped works will commence this year.”