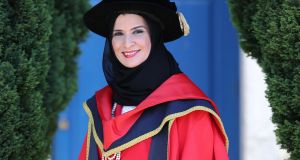 The most senior female politician in the Arab world wasconferred with an honorary Doctorate in Philosophy at Dublin City University (DCU) on Thursday.

The highest honour DCU can bestow was conferred on Dr Amal Al Qubaisi as “a figure of great historical significance,” the university’s chancellor, Dr Martin McAleese said. She also presided at the opening of DCU’s Centre of Excellence for Diversity and Inclusion.

Dr McAleese said Dr Al Qubaisi was “the first woman elected to the UAE (United Arab Emirates) assembly, the first female leader of the Emirates national parliament, the first such female leader in the entire Arab world and now speaker and president of the National FederalCouncil (in the UAE)”.

“We are proud to welcome her as a champion of the full inclusion of women, an innovator in the building up of relationships between the Gulf states, and a woman proud of her country’s future who also relishes the great gift of diversity.”

He said Dr Al Qubaisi was welcome too as “a woman of faith” who knew “how important it is that inter-religious dialogue opens us up to one another so that mutual understanding and respect can flourish”.

DCU president Dr Brian MacCraith, who conferred the doctorate, said of Dr Al Qubaisi that “if there’s one word which captures what she stands for it is tolerance, an increasingly rare attribute in a world of coarsening values, xenophobia and rampant populism”.

Dr Al Qubaisi thanked DCU “for a great honour” and said “I come from a country where more than 200 nationalities live together, a home for more than 40 churches, two Hindu temples and a synagogue”.

She said what united them all was “respect, respect for each other, for human rights, for contribution to the society and above all a respect for shared dreams of success, prosperity and a brighter future”.

Referring to DCU’s new Centre of Excellence for Diverity and Inclusion Dr McAleese said “our students are citizens of a complex, modern, multi-cultural, multi-faith Ireland” in “a complex world struggling with the mix and meld of identity, patriotism, nationality, borders, faiths, immigration and globalisation.

“We hope the Centre will make a formidable contribution to interrogating and comprehending the forces at work in this country and this world.”