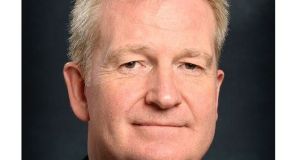 The new Catholic Bishop of Achonry diocese in the west of Ireland is to be Fr Paul Dempsey (48), current parish priest of Newbridge Co Kildare. He will be installed in April.

The youngest in his family, he has one brother and two sisters. Both his parents died in 1994. His mother Berry died from cancer in February that year and his father Tony died suddenly 12 days later.

He studied for the priesthood at the Milltown Institute in Dublin, St Patrick’s College, Carlow and All Hallows College, Dublin. He was ordained at the Cathedral of the Assumption, Carlow, in July 1997.

He has served as curate in Clane & Rathcoffey parish in Co Kildare and, seven years later, in Kildare town when he was also appointed youth director and vocations director for the diocese of Kildare and Leighlin.

While in Kildare town he began writing weekly articles for the Leinster Leader newspaper. He also began presenting a weekly religious and social affairs programme on Kildare FM radio every Sunday morning.

In 2008 Fr Dempsey secured an honours MA in theology at the Milltown Institute for his thesis on “The Contemporary Irish Catholic Church – A Church in Crisis or in Question?”

In 2009 he moved to the parish cluster of Naas, Sallins and Two-Mile-House and was there until August 2014 when he was moved to Newbridge parish and was also appointed Vicar Forane for the diocese’s north deanery, consisting of 17 parishes.

In September 2015 he was appointed parish priest of Newbridge and Administrator of Caragh and Prosperous parishes, serving approximately 32,000 parishioners. His new diocese, Achonry – taking in 23 parishes in Mayo, Sligo, and Roscommon – has a Catholic population of 34,826.

The announcement of his appointment to Achonry was made at 11 am Mass on Monday in St Nathy’s Cathedral, Ballaghderreen, Co Roscommon. It was concelebrated by the papal nuncio Archbishop Jude Thaddeus Okolo, Fr Dempsey, Fr Dermot Meehan, current administrator of the diocese.

In a December 2010 article for the Furrow magazine, on ‘Being a Priest in Ireland Today’, Fr Dempsey wrote that “the Church community needs to enter into a period of deep reflection.” It would be “refreshing to see some leadership around this ‘reflection’ culminating in some form of national Church gathering,” he said.

He was acutely aware of major issues “where people are not being heard such as women and their role within the Church, also those who find themselves in a strained relationship with the Church because of a second relationship or their sexual orientation”.

Many “faithful people and priests feel they are not being listened to in the Church. This is leading to a great deal of frustration. Many are seriously disillusioned, finding themselves in a ‘wilderness’,” he said.

As an example he pointed to the appointment of bishops, where there was so little consultation. “There seems to be a distinct lack of renewal in this very significant area of Church life,” he said. “Could those with influence in this area perhaps listen to what so many priests and people are saying?” he asked.

More broadly the reality was “that the number of priests is now plummeting in Ireland” and “we seem to be stumbling in a haphazard way into the future.Where is the debate within the Irish Catholic Church around the direction we are going? In particular where is the voice of the younger generation of clergy? ”

There was “much talk of change and renewal in the Irish Church, but what do we really mean by this?” he asked. So much was happening in society “but where is the voice of the Church?” he asked.

“We are met by a deafening silence from the Church on so many issues. Surely this is not good enough!” He asked “should we not be sending others (clerical and lay) to be trained in communications so as to have a pool of commentators able to deal with the media” and “voice the message of the Gospel in the public square on issues concerning so many in our society?”