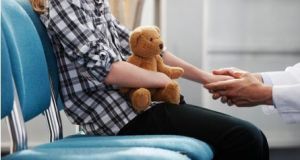 In spring 2010, a senior nurse working in the Child and Adolescent Mental Health Service sent a letter to social workers “expressing serious concerns” the mother was finding it difficult to manage Amy or “give her any kind of positive experience”.

When she was just six years old, Amy* reported witnessing domestic abuse and physical and verbal violence between her parents, including her father punching her mother.

A psychologist’s report from 2006 said as a result of her parents fighting the young girl was “emotionally and psychologically disorganised”. Her parents were in the process of legally separating and Amy’s case was referred to the Laois-Offaly social work department to provide her with ongoing support.

However, for two years afterwards her case was left unallocated without a social worker. This was the first in a long series of failings when the health service (and later Tusla) would let Amy’s case fall through the cracks in the system.

The chronology of failures by the social work department to respond to serious concerns about the care of the young girl was laid bare in a 2015 internal review by childcare expert Lynne Peyton, never released publicly but now seen by The Irish Times.

The review found there was “virtually no social work involvement between 2006 and 2011” in Amy’s case, despite the child being repeatedly referred to social services for support.

In early 2007, a school psychologist wrote to the social work department requesting support for the family. The following April, Amy’s psychologist made a formal report to social services after a phone call where her mother said “she did not want Amy any longer”.

There was evidence an initial assessment form was started by the social work department but it was not finished and a month later the department closed the case. At this stage, the child had not had contact with her father for over a year and lived with the mother.

Two years later, in spring 2010, a senior nurse working in the Child and Adolescent Mental Health Service (CAMHS) sent a letter to social workers “expressing serious concerns” that the mother was finding it difficult to manage Amy or “give her any kind of positive experience”.

A social work team leader replied a month later to state the case would be followed up, but there was no further contact with CAMHS.

At the start of 2011, a consultant child psychiatrist wrote to the same team leader warning as a 10 year old Amy had “very significant behavioural problems” and expressed concern her family placement with her mother would break down. There was no evidence of any response.

Early in the year, a school liaison officer made a formal referral to social services expressing “serious concerns” about Amy’s troubling behaviour, including verbal abuse towards other children and teachers, and erratic behaviour. There was no follow-up, or any initial assessment of the referral by social workers as required.

Only a fortnight later, a general practitioner wrote to the social work department to warn that Amy’s mother had disclosed concern she might injure her daughter during a domestic altercation. The review found this was not followed up.

Three days later, Amy was admitted to an adolescent psychiatric unit, and the school liaison called the duty social worker to report the situation in the home was “very concerning”. Yet again the review found no evidence of any response this report.

The social work department received another letter from a consultant psychiatrist seeking an “urgent strategy meeting” and warning Amy’s home situation would break down without intensive intervention. The review said following these increasingly concerning referrals, her case was “eventually allocated to a social worker in May 2011”.

A CAMHS report said Amy, who was then 11, “was at the emotional level of a three to five-year-old child and had attachment issues since she was four or five”. It recommended she begin respite breaks from her mother’s home with a foster family.

Around this time, a social worker met Amy’s father, who had been absent from her life for several years. He had not attended a mandated domestic violence course for men and told the social worker he felt he did not need to.

In early 2012, a meeting of several professionals involved in Amy’s case expressed concern due to the “limited hope” that her mother would cope with caring for her long term.

The case came to a head the following month after Amy was suspended from school. Her mother phoned a social worker in an agitated state and “threatened to kill Amy that evening”, the review said. After this the mother gave her consent for a voluntary care order to place her daughter with foster carers, and was provided with access visits.

More than a year later, in 2013, Amy made “significant allegations of prior physical abuse by her mum to [her] foster carer”, the review said. These included being hit with a brush, a wooden spoon and being locked in her bedroom.

When social workers followed up on the allegations, the mother “admitted she had hit Amy on a number of occasions”, and at the time in question their relationship was very stressful.

Later in 2013, the social work department received a phone call alleging previous extreme violence from Amy’s father towards another child, but the review found this was never followed up.

Following increased access visits, both Amy and her mother wanted her to return home, and she was discharged from care to her mother in mid-2014. At this point Tusla had taken over responsibility for social services from the Health Service Executive.

During this crucial period, Amy’s case was again left unallocated when her social worker went on extended leave. In September 2014, Amy was again referred to CAMHS by her GP “following concerns about suicidal thoughts”, the review said.

A serious incident occurred between Amy and her mother in early 2015, where during a verbal dispute Amy was dragged from the sitting room by her ponytail. The review found no evidence of any initial assessment following a report to Tusla, despite the mother admitting to the incident.

The expert review said while it was appropriate to initially admit Amy into care, there was a failure to find suitable foster carers to meet her needs long term. It criticised the decision for Amy to return home when “the involved professionals had no confidence” her mother would be able to cope.

At the time of the review in mid- 2015, Amy was spending a school holiday with her father, with the intention of returning to her mother afterwards. The report recommended in the likely event Amy’s placement with her mother was “not sustainable” that “only realistic options for her future care should be considered”. It also warned her father was an “unknown quantity” to the social work department.

It was critical that no consideration had been given by Tusla for legal intervention following the volatile home situation after Amy’s return, such as a statutory or supervisory care court order – which would have given Tusla more authority to direct Amy’s care. Despite escalating concerns after her return home, there did not appear to be “any plans” to allocate Amy’s case to a new social worker at the time of Peyton’s review.

In a statement, Tusla said it could not comment on individual cases. However, a spokeswoman said recommendations from Peyton’s review were put in place as part of a wider “service improvement plan” introduced in the Laois-Offaly area at the time. Improvements in the area were “clearly evident” from subsequent Health Information and Quality Authority inspection reports, she said.

*The name of the child has been changed to protect her identity.