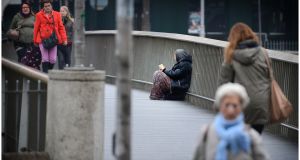 The Society of St Vincent de Paul (SVP) has called on all general election candidates to agree that the next Dáil and Seanad will be committed to eliminating poverty in Ireland. File photograph: Bryan O’Brien/The Irish Times.

The Society of St Vincent de Paul (SVP) has called on all general election candidates to agree that the next Dáil and Seanad will be committed to eliminating poverty in Ireland.

The charity is seeking an assurance that the next government will follow the example of the Canadian, Scottish and New Zealand governments by introducing a poverty reduction act, which would make the UN Sustainable Development Goal of eliminating poverty by 2030 legally binding.

It said the next Dáil should commit to eliminating child poverty within five years and to reducing consistent poverty to 2 per cent or less by 2025.

In its ‘Election 2020 Priorities’ document, the SVP also calls for a housing strategy “which seeks to meet 70 per cent of all housing needs through built local authority or approved housing body units by 2030” and a national affordable “cost rental” option for lower income households.

Cost rental involves rents that cover the cost of delivering, managing and maintaining homes, which are generally significantly below market rates.

The SVP also called on all candidates “to take a stand against racism and intolerance” and asked them “to engage with marginalised and disadvantaged voters in their communities to ensure their voices are heard”.

Kieran Stafford, SVP national president, said “we want the next programme for government to take decisive action so we can see an end to poverty once and for all”.

He recalled how the SVP last year “received over 150,000 requests” from families and individuals who needed help with food, fuel, electricity and education.

Mr Stafford said the biggest driver of poverty in recent years was housing costs. “At a fundamental level, it is impossible for anyone to find a route out of poverty if they do not have safe, decent and affordable housing.”

Dr Tricia Keilthy, SVP head of social justice, said there are almost 700,000 people living “below the poverty line” in Ireland at present. She said this was “not inevitable, and poverty eradication is possible, but it requires well designed policies, resources and political will”.