In Dublin homeless people living in tents say they feel safer in their current accommodation than in hostels, despite the serious injuries sustained by one man last week. 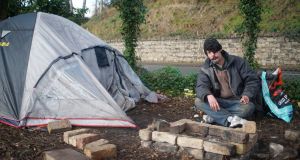 James Grant: ‘At night it’s better to be awake, to be alert. That way I’m not going to die of the cold.’ Photograph: Enda O’Dowd/The Irish Times

In Dublin homeless people living in tents say they feel safer in their current accommodation than in hostels, despite the serious injuries sustained by one man last week.

A homeless man in his 30s remains in a “serious but stable” condition in hospital following the incident on Tuesday when his tent was lifted by an industrial vehicle during a clean-up of the Grand Canal.

Camped in the same area until last October was James Grant (36), from Inchicore. He has moved to a more secluded area, in Islandbridge.

There, beside his one-man tent he has constructed a small fire-pit with bricks. An old armchair he found is nearby.

“You are vulnerable in a tent. Nowhere is safe, but I have been camping since I was seven. My dad was a soldier and he learned me how to camp, how to keep warm.” Mr Grant is wearing four layers of clothes and has about 10 duvets and blankets in the tent.

“I mostly sleep during the day. At night it’s better to be awake, to be alert. That way I’m not going to die of the cold.”

He has a “bit of depression” and has “a few drinks” which leads to arguments with family, he says. “I always prefer the tent to hostels,” he says, citing the smoking ban as an issue.

“I was in a hostel and they kicked me out over smoking out a window. And then there’s people doing crack and heroin in the toilets, walking around like zombies. What the hell?”

Asked about the incident on the canal he replies: “That is where my tent used to be. That could have been me; if they are capable of just picking up a tent and not checking, well . . .

“I feel more and more people are going downhill and people don’t care anymore. I know they go on the protests for the homeless, but that’s not working. The help we need is to lower the rates of the rents. Then everyone could get a proper house, could get a gaff.”

Meanwhile, in the Phoenix Park, over a railing and down through undergrowth, are the remains of a campfire, discarded tents and blankets.

Stacey (25) from Coolock, not her actual name, is with a male friend, packing up their tent. They have found a garden behind a boarded-up house where they will feel “safer”. She has been homeless for four years and has no family to stay with and dislikes the emergency accommodation available.

“You have to ring [the freephone number for homeless] between 4.30 and 5.30. You can ring again at night-time. The only reason you can get a bed then is if someone doesn’t turn up to their bed,” says Stacey.

From 11pm they may get access to the night cafe where a roll-out mattress is provided.

“They wake you at six in the morning. So you’re getting only a few hours’ kip. I’d rather stay in the tent,” she says. “I wouldn’t sleep in a tent on my own, being a girl. Safety? I have protection on me – a little blade. I wouldn’t use it but I have it, just in case.

The most recent data shows there were 2,687 single adults in emergency accommodation in Dublin in November 2019. In all 1,727 single adults became homeless in the capital for the first time between January and November last year.