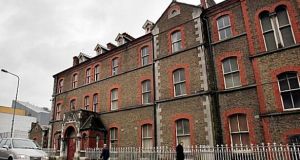 Councillors from all parties proposed a ‘multipurpose site of conscience’ at the location of the former Magdalene laundry. File photograph: Getty

Dublin city councillors have voted in favour of progressing plans to turn the former Magdalene laundry building on Sean McDermott Street into a centre for third-level education.

The proposed plans, which were presented to councillors by Dublin City Council representatives on Tuesday, also include the development of social housing units for older people and a memorial in memory of victims and survivors of Ireland’s institutional homes.

Deputy chief executive of the housing department Brendan Kenny confirmed that discussions are ongoing with educational institutions around the development of the site, but that the council wanted to ensure full support from public representatives before proceeding with the project. Proposals also include the construction of social units for older people on the site and a memorial, he said.

Mr Kenny said the plans will now go to tender and that the council is seeking interest from all major educational institutions. But he confirmed that discussions with the National College of Ireland regarding the redevelopment of the site had already taken place.

Local Dublin north inner city Cllr Gary Gannon posted on his Facebook page on Tuesday afternoon that the plans for the site would be an “incredible development for the city” and that the area would become a “living monument to Ireland’s past, to acknowledge the wrongs that was inflicted on women and men throughout our history, and to become a place of hope and renewal”.

Cllr Gannon led the motion to block the sale of the two-acre site in 2018 after it was revealed the Japanese hotel chain Tokyo Inn had offered the council €14.5 million for the former laundry. Councillors voted overwhelmingly in favour of halting the proposed sale.

‘A site of concience’

“We haven’t stopped in terms of bringing activist groups to the site, talking to area managers and trying to give them a sense of what this site of conscience would be like,” said Cllr Gannon. “They were fearful that we wanted the whole site to be a museum but we explained that a site of conscience can be a multitude of things, that community and cultural amenities could all be incorporated.”

In their Dublin Agreement for 2019-2024, published in June 2010, councillors from across all parties laid out plans to develop a “multipurpose site of conscience” at the location of the former Magdalene laundry that would “seek to honour and commemorate the victims and survivors of Ireland’s institutional past”.

Councillors were told on Tuesday to expect an update on the tender in February, according to Cllr Gannon. He added that the “open-heart collective”, consisting of activists, architects and academics, would continue to work on plans for the memorial in consultation with survivors, their representative groups and the local community.