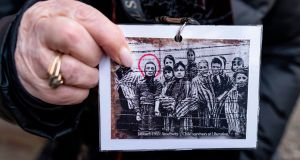 Holocaust survivor and former prisoner of Nazi death camp Auschwitz-Birkenau, Miriam Ziegler, shows a picture of her and other prisoners taken in January 1945, at the camp museum on Sunday, one day before the 75th anniversary of its liberation. Photograph: Wojtek Radwanski/AFP/Getty

President Michael D Higgins has warned that “an ugly anti-migrant sentiment is attempting to rear its head in Ireland”.

This “corrupted form of populism has not abated across Europe, and anti-Semitism has not been eliminated from the extreme rhetoric of those seeking to scapegoat the vulnerable”, he said.

Speaking at the annual Holocaust Memorial Day Commemoration in the Mansion House on Sunday night, he said “refugees, immigrant communities and other minority groups are increasingly described as a threat to the rights of the majority”.

On Monday, Mr Higgins will attend the 75th anniversary commemoration of the liberation of Auschwitz-Birkenau near Kraków in Poland. On Tuesday morning in Kraków he will meet Leonard Abrahamson, president of the Jewish Representative Council in Ireland, following which he will visit Jewish centres in the city at Kazimierz and Podgórze.

Holocaust survivors at Sunday night’s Mansion House ceremony included Tomi Reichenthal and Suzi Diamond. Also in attendance was Kinga Paszko, whose Polish family received the honour of Righteous Among the Nations for saving a Jewish family during the Holocaust.

Mr Higgins spoke of the rise of an “often bogus, indeed mythical, type of nationalism on virtually every continent”.

‘An invitation to hatred’

He said: “The toxicity of anti-Semitism is not absent from this rhetoric, and it should be identified and condemned for what it is – an invitation to hatred and hate speech.

“Three-quarters of a century ago, the 60th Army of the First Ukrainian Front arrived at Auschwitz, and when they entered the concentration camp complex, it remains hard to imagine fully the horrors they uncovered – the mass graves and the remains of the 1.1 million people systematically murdered, their possessions and personal belongings,” he said.

These events “were preceded by the hate of an anti-Semitism, and the excluding stereotypes of minorities, something we must be vigilant to ensure is recognised and unequivocally opposed now and in the future”.

In remembering the Holocaust, he said, “we respectfully and solemnly commemorate those who died or suffered at the hands of the Nazis, and we vow to do all we can to ensure that such a horror never occurs again”.

It was “deeply worrying to observe an emerging trend of the rise of extremist language and politics across the streets of Europe”, he added. “What a great failure it is that less than three generations after the catastrophe that was World War II”, so much was reduced “to a discourse coarsened by its acceptance of aggression as the language of media and the street”.

Mr Higgins said it was depressing that obvious parallels between the rise of fascism in the 1930s and contemporary humanitarian and democratic crises appeared to be lost on many.

“As anti-Semitism, xenophobia, racism and intolerance are once again on the rise across Europe and many parts of the world, we must remember the Holocaust collectively and work together to ensure that hatred and inhumanity is not allowed to spread its dark shadow across Europe and the world,” he said.

It was why “we must preserve sites such as Auschwitz and Birkenau, where I will be tomorrow [Monday]to represent the Irish people at the 75th anniversary of the camp’s liberation”, he said.