Next government’s budget decisions must be ‘rural-proofed’ 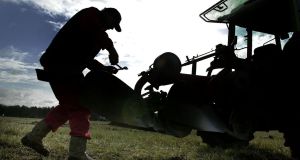 “Two out of every five jobs in Ireland are at high risk of automation with towns where employment is dominated by agriculture and manufacturing most exposed to the impact of automation on employment.” Photograph: Frank Miller

A strategy to “rural proof” all government budgetary decisions must be an “essential component” of any future administration’s approach to rural Ireland, Social Justice Ireland has said.

In the first of a series of election briefing papers published on Monday, the think tank says rural communities are older, poorer and less well-served by public services than urban centres.

Priorities for rural communities must include high-speed broadband; a “just transition” to ensure rural people are not disproportionately affected by carbon taxes; an accessible and efficient public transport network; sustainable agriculture policies; and targeted education and training programmes especially for older workers.

According to 2017 data, the paper says, the deprivation and “at-risk” of poverty rates are higher in rural areas than the national or urban rates.

“The driver of the rural economy in Ireland has moved from being primarily agricultural to a more diverse base involving services, manufacturing, tourism and others,” it says.

“Two out of every five jobs in Ireland are at high risk of automation with towns where employment is dominated by agriculture and manufacturing most exposed to the impact of automation on employment.”

Social Justice Ireland says any future government should be planning for “viable rural communities in all parts of Ireland where people have access to meaningful work, adequate income and decent services and infrastructure”.

Policy must “ensure public service delivery in rural areas according to the equivalence principle and that rural-proofing is an essential component of all government policies”.

The think tank makes 11 calls on a future government, among them is ensuring balanced investment between the regions, support for rural entrepreneurs, and preparations for the impact of technology on the future of work.