Public policy, gender roles in work and care and sharing of responsibilities to be debated 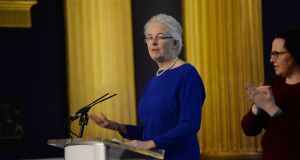 Gender could be the reason for barriers and constraints in Ireland, former secretary-general of the European Commission Dr Catherine Day said in Dublin on Saturday afternoon.

Gender had an important impact “on the choices we are free to make – or that are pre-determined for us by society”, she said, at the inaugural meeting of the Citizen’s Assembly on Gender Equality in Dublin Castle.

Dr Day, chairing the assembly, said “there is history in why we are here today”. Those present were “making the next steps on a journey that goes back to the promise of ‘equal rights and equal opportunities to all its citizens’ in the 1916 Proclamation. We will be looking at parts of our 1937 Constitution and discussing whether or not they should be changed.”

The members would be “discussing public policy, representations of women and men in the worlds of work and care, participation in public life and sharing responsibility in our home lives”, she said.

She recalled how in the summer of 2019 the Dáil and Seanad adopted the resolution which would guide the assembly’s work. In summary, it asked, she said, that the assembly “advance gender equality by making proposals on a range of issues and to prioritise those issues which may include policy, legislative or constitutional change”.

It had also asked that the assembly do this “while having regard to the legal requirements and the costs versus the potential impact of these proposals”.

Issues for consideration, as set out by the TDs and Senators, ranged from “challenging the barriers and social ways of behaving that facilitate gender discrimination, to reassessing the economic value placed on work traditionally done by women”.

They included “looking at where the responsibility for care lies, especially within the family, assessing early years parental care and facilitating greater work/life balance, and scrutinising the structural pay inequalities that result in women being disproportionately represented in low pay sectors”, she added.

“Some may feel that this assembly will be about women’s issues – and it certainly will be. But gender equality equally affects and involves men and the LGBT+ community. Our debates will be inclusive, and we will only succeed in advancing gender equality if everyone engages,” she said.

In a presentation to the meeting, Dr Evelyn Mahon, retired associate professor in the School of Social Work and Social Policy at Trinity College Dublin, traced the evolving status of women in Ireland from the 1937 Constitution to the present. She noted how fatherhood had no protections in Irish law. In that context, there was, she said, “ a patriarchal deficit” in the Constitution.

The Oireachtas resolution setting it up stated that it could engage independent researchers “to monitor and record, amongst other things, the perceived deliberative quality of the assembly”.

Dr Jane Suiter of Dublin City University is to conduct this research in collaboration with Prof David Farrell of UCD, Prof Yvonne Galligan of TU Dublin, and Prof Simon Niemeyer, University of Canberra.

Any person, group or organisation with views on achieving greater gender equality may contribute to the work of the assembly between Monday next, January 27th, and Friday, March 6th. Details on how to do so are available at the assembly’s website, citizensassembly.ie

The assembly consists of 100 people entitled to vote in a referendum, including the chair, Dr Day. Amárach Research selected citizens by calling door to door and members are broadly representative of demographic variables as reflected in the national census, including age, gender, social class and regional spread.

There was also a two-stage validation process to rescreen and ensure the integrity of the selection process. Politicians, officers in political parties, journalists, employees of polling companies and members of advocacy groups active in the area of gender equality were not eligible to serve.

All its plenary meetings are broadcast live at citizensassembly.ie and its documentation is available on the website. It can be found on Twitter @CitizAssembly and YouTube: The Citizens’ Assembly.

What should you do if you think you might have coronavirus? 19:58
Coronavirus: One case confirmed in Northern Ireland 20:03
Predictions of ‘skin and hair flying’ as FG selects 13 of up to 60 Seanad hopefuls 19:14
Legal challenge to Shannon LNG project has EU implications 19:04
German human rights lawyer brings case against Google Ireland 18:56