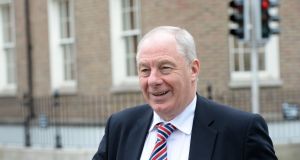 Minister for Rural Affairs Michael Ring is allocating a total of € 500,000 for 339 men’s and 33 women’s sheds to help purchase equipment and carry out works. Photograph: Eric Luke / The Irish Times

The Government has announced State funding for women’s sheds for the first time.

Men’s sheds have taken hold over the last decade, and they see local groups of retired or semi-retired men come together to undertake community work.

Recent years have also seen the development of women’s sheds and the announcement from Minister for Rural Affairs Michael Ring is the first time they will receive State funding.

Examples of how the funding will be used include € 1,000 to the Deise Women’s Shed in Dungarvan, Co Waterford, for portable sound equipment and projection equipment.

“Since its establishment less than 10 years ago, the impact of the men’s sheds movement has been phenomenal,” Mr Ring said. “I’ve no doubt that the emergence of women’s sheds can only be a good thing for community life in Ireland. ”