Console failed to show how it spent €75,000 Lotto grant 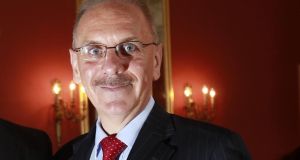 The liquidated suicide-bereavement charity Console failed to certify how it spent a €75,000 grant from National Lottery funds in 2012.

The Department of Health, which administered the grant, has said it may seek the return of the money, if it emerges it was spent inappropriately by Console.

In June 2016, a HSE audit found that the founder of the charity, Paul Kelly, and his wife and son had run up bills of almost €500,000 on the charity’s credit cards. The money was spent on items such as groceries, designer clothes and foreign trips.

The charity was liquidated last year with debts of about €300,000. Its functions were taken over by Pieta House.

Separately, it is understood that liquidators responsible for winding up Console are to demand the repayment of more than €500,000 from Mr Kelly and another party.

A report by liquidator Tom Murray is expected to be published in the near future.

Console received €500,000 from the Department of Health between 2005 and 2012, excluding 2010. The money came from the department’s National Lottery discretionary fund, which allocated funding to national and local organisations providing information and support to specific groups in need. The discretionary fund scheme ended last year.

The money was given to Console on condition that it would only be used for the authorised projects it was intended for and that a certificate of expenditure be submitted to the department when the projects were completed.

Console failed to supply a certificate of expenditure for 2012, the last year money was paid to it from the fund. That year it received €75,000 from the fund.

The department has confirmed it did not receive the documentation and said it may seek repayment of the money.

However, a spokeswoman indicated it will not take any action until the completion of an investigation into Console which is being carried out by the Office of the Director of Corporate Enforcement. The department does not want to pre-empt the investigation by making a repayment demand now.

“The department is open to seeking a repayment in circumstances where it is shown that expenditure was not appropriate, but notes that an investigation by the Office of the Director of Corporate Enforcement into issues surrounding the liquidation of Console is ongoing,” the spokeswoman for the department told The Irish Times.

The Department of Foreign Affairs has already demanded the repayment of €150,000 it gave to the charity. The department issued the demand in letters sent to Mr Kelly and his wife Patricia.

The money was given to Console in 2013, 2014 and 2015 as part of the department’s Emigrant Support Programme (ESP). The ESP grants are given to organisations providing support and advice services to Irish emigrants.

It is understood that if Mr Kelly is found to be personally liable for misused money, debtors may seek to recoup it through the sale of his two properties. This will depend on a decision by the High Court.

The HSE, which provided a large portion of Console’s funding, told The Irish Times it will not be seeking a refund, as the charity provided all the agreed services funded by the HSE.

The Department of Foreign Affairs’s demand for repayment has been welcomed by Charities Institute Ireland, which said it “also welcomes the increased scrutiny and regulatory enforcement we are seeing across the charity sector”.

“Every charity needs to be underpinned by a culture of good governance,” Charities Institute Ireland chief executive Lucy Masterson said.

“Every incident like this damages trust in Irish charities and consequently affects the vital services that they deliver every day to hundreds of thousands of people.”

Ms Masterson said that “mismanagement is something we have to all tackle together so that the public keeps supporting the work of Irish charities, which are core to the welfare of the society we live in”.