Ireland’s Islands: Sherkin and Hare residents have a renewed confidence, but challenges remain 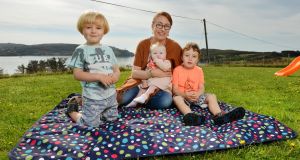 The births of six babies on Sherkin and Hare islands, off west Cork, in the past four years, including the arrival of three babies on Sherkin this year, have done more than anything else to raise spirits in the island communities and give them confidence for the future.

It’s a sign, she says, that people in their 30s are aware of the quality of life to be had on an island and that you do not have to live in a city to be successful and earn a good living.

“What’s special about the islands is the huge sense of community there, so although you might not be living in a big city, you’re not isolated.”

Conall Buggy, a 37-year-old Sherkin native, travels to work on the mainland in a 13ft open punt every day. After landing at Turk Head, he drives to Bantry hospital, where he works as a physiotherapist. “It’s five minutes across the water and half an hour to Bantry,” he says.

He returned to Sherkin in 2015 after 16 years in Britain. He and his wife Priscilla have a four-month-old baby daughter, Isla.

He’s thrilled to be part of island life again, he says, and Priscilla, a secondary-school teacher from Chile, has settled in well. “The upside is it’s very safe; you don’t have to lock your doors, it’s lovely. There’s a great community here, which is something I really missed in the UK.”

I always need to know how high or low the tide is when we’re travelling, and I watch the weather like a hawk. You also have to have more than one outboard engine in case of failure

However, there are concerns about the future. When baby Isla gets to schoolgoing age, they will have to manage the logistics of getting her to and from a mainland school, because the school on Sherkin closed last summer.

“Sending a child in and out on the ferry is very challenging, because ferries get cancelled,” Conall says.

They are already pondering whether to send Isla to the closest mainland school, at Rath, and try to deal with getting her over there and back to the island every day, or move off Sherkin to a rented house for the winters.

“There are a lot of logistics to consider when you’re living on an island,” he says. For example, a shopping trip to Cork city, two hours’ drive away, is a “mammoth undertaking”, particularly with all the accoutrements that accompany a baby.

“You drive from the house to the dock, unload everything into the boat, sail across to Turk Head, unload the boat, load the car, then drive to Cork. You also have to have two cars - an island car and a mainland car.

“I always need to know how high or low the tide is when we’re travelling, and I watch the weather like a hawk. You also have to have more than one outboard engine in case of failure.”

He says he spent a long time in England but it never felt like home. “The only place I ever felt really at home is Sherkin and that’s why I put up with all of this.”

Fellow Sherkin islanders Olive McCarthy and her husband Sean O’Neill, who built a house on the island five years ago and have three children, are also dealing with the schools issue.

Since last September, William, who at three-years-old is their eldest child, has attended playschool in Baltimore three days a week. He currently travels there by ferry with his grandmother Maureen O’Neill, who brings him to playschool and then waits to bring him back to the island on the 2pm ferry.

When he starts primary school in Rath in September next year, the logistics could become even more challenging.

“We’re very worried about that. Five days a week of school will be very different to three days of playschool, and his grandmother is in her 70s; it’s a big ask,” says Olive, a Tusla social worker who works in Skibbereen.

She catches the 8am ferry each day and then drives to work, while Sean, who runs a construction business from the island, travels all over west Cork for work.

Eventually, too, their other two children will reach schoolgoing age. “It’s becoming very stressful trying to plan how to get the children to school and ourselves to work from the island, given that both of us work full-time on the mainland,” Olive says.

“The ideal would be to have another home on the mainland and live between them, or alternatively, just move to the mainland. It would make life much easier if they hadn’t closed the school on Sherkin.”

The upside of island living, she says, is that they truly love Sherkin. “I’ve been coming here since I was very small - my father was involved in a mussel farm near the island. I love the island and I love nature. It’s a beautiful place and very calming.”

However, foremost on her mind is how the family can continue living on the island when their jobs and the children’s schools are on the mainland.

“At the moment we’re re-evaluating our situation as full-time residents for the long-term.”

Adopted Hare islanders Kevin McCormack (39) and his Thai wife Amm (33) had their first baby, Finn, last November. Kevin, who grew up in Dublin and worked abroad for many years, has been director of operations at Heir Island Sailing School – there’s more than one way to spell the island’s name – since moving there last year.

“I’ve always wanted to live on an island. It’s very quiet and you can get a bit cut off by the weather now and again, but that doesn’t worry us. There are hardly any cars on the island and no pubs and you’d feel very safe letting a child out to run around. When Finn grows up he’ll have great freedom.

“Pretty much everyone knows each other. People look out for each other. We have a very nice community here.”

Hare islanders, he points out, can even get their shopping delivered by ferry nowadays. The Fields SuperValu store in Skibbereen delivers to the ferry and, once on the island, the groceries are delivered to each house.

The contrast between island and mainland living has left him more aware of everyday urban facilities like cafes and buses. “You become more aware of them and you appreciate them.”

But he’d never swap. “Out here, even though you’re busy, you have beautiful beaches and sunsets and the opportunity to have fun on the water. For me, all of these things outweigh what you might be missing by not living on the mainland.”