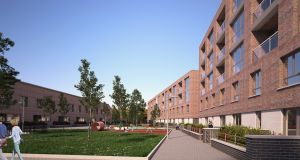 A €20 million estate of more than 60 council houses and apartments is to be built by Dublin City Council in Ballyfermot, more than eight years since a regeneration project for the site was shelved.

Cornamona Court in Ballyfermot will be the largest housing estate built by the council since the property crash, and one of the few to be directly built by the local authority in several years.

Ten years ago the council demolished an old complex of senior citizens’ bedsits on the Cornamona site beside Kylemore College in the centre of Ballyfermot, with a plan to build 90 new senior citizens’ homes on the land.

However, following the economic downturn the project was shelved in early 2009, and the land left vacant.

The council has now secured Government funding of just over €20 million to build 61 homes on the site, for both senior citizens and general applicants on the council’s housing waiting list.

The estate, designed for the council by Paul Keogh Architects, will have 16 two-bedroom houses and 12 three-bedroom room duplexes for families on the housing waiting list, as well as 29 one-bedroom and four two-bedroom senior citizens apartments. All the homes will have dual aspect windows and a residents’ common room is also included in the scheme.

Assistant city manager and head of housing Brendan Kenny said the scheme represented a move towards more “direct build” housing projects being undertaken by the council.

“A lot of the social housing that has been provided over the last 10 years has been built by approved housing bodies. This is a direct build council housing project and that’s something we’ll see more of in the coming months.”

The scheme will be processed through the council’s internal planning system. Under this system the architect’s designs are available to view, and public submissions can be made until September 20th, after which the city councillors determine whether the project goes ahead.

“This should come before the city council in the first Monday of November for agreement to go to tender, and the whole project should then take 18 months to build,” Mr Kenny said.

The change from solely senior citizens’ housing, reflects the pressure for general housing in the city, Mr Kenny said.

“The last project was designed in a very different era. We now have such a big need for family housing that it’s appropriate to change what we do on this site. There are also benefits to having a mix of tenants in the development.

The council built just 40 homes last year. Mr Kenny conceded the pace of development has been slow, but he said it would accelerate over the next year.

“There will be far more projects coming forward. The problem is, once you turn the housing machine off, it’s very difficult to turn it back on.”