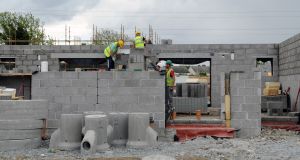 Local authorities across the State built just 161 social housing units in the first nine months of last year while more than 90,000 people were officially recorded as waiting for accommodation on social authority housing waiting lists.

The figure taken from the Department of Housing’s website does not include other social housing solutions provided by the State’s 34 local authorities and city councils, including rentals, acquisitions and refurbishments of existing units, which brings the total closer to 6,000.

Nonetheless, it reflects the low level of direct building by local authorities, which has persisted since the crash.

The figures show that Dublin City Council, the city authority with the largest population and biggest housing crisis, built just 31 units over the nine-month period.

The figures show Kildare County Council, the authority responsible for one of the fastest-growing commuter belts, built no social housing units during the period and has only constructed 12 units since 2010.

In total, 21 local authorities, including Galway City Council, were recorded as having built no social housing units in 2016, while Cork City Council built just one additional unit.

A spokesman for the Department of Housing said local authorities had effectively ceased building housing due to the economic crash and the lack of funding available.

However, he said that since the end of 2015, the Government had increased funding for local authority housing, but that it would take time for the building rate to pick up.

“It was recognised at the time that this build programme would take time to scale up and local authorities would need to recruit the appropriate staff, such as planners, architects, quantity surveyors and administrative staff,” he said.

He also noted that there was currently plans for 130 developments delivering 2,500 social homes on sites nationwide, while overall there were plans for 607 developments of 10,000 homes at various stages of planning and delivery in the pipeline.