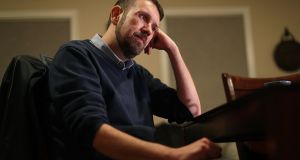 Peter Murphy, son of late Bishop of Galway Eamonn Casey was 17 when his story was made public. Photograph: Suzanne Kreiter/Boston Globe

A self-help website set up in Ireland to assist children of Catholic priests has been contacted by women of all ages from around the world, ranging from a Boston lady in her late 80s to the mother of a three-year-old child in the Philippines.

“It proves that this is an issue that is not just confined to the past. It is ongoing,” said Vincent Doyle (34) founder of www.copinginternational.com which is funded byArchbishop of Dublin Diarmuid Martin.

Mr Doyle told The Irish Times on Tuesday that, since mid-August, 1,062 individuals had logged on to the website which has had 8,000 separate visits and 38, 000 hits from 53 countries.

Mr Doyle’s father, Co Longford priest Fr John J Doyle, died in 1995. On confirming that the priest was his father in 2011, he assumed the surname.

An article posted on the website in 2015 claims confidentiality agreements made by mothers of children fathered by priests were “a form of blackmail against the mother and the child.” Written by well-known US canon lawyer Fr Tom Doyle, it says “there is no valid reason for such agreements or contracts under any circumstances.”

In a 2015 response to Fr Doyle’s observations, Ireland’s Catholic bishops said a confidentiality agreement was possible “if the parties enter it freely with the primary purpose of protecting the best interests of the child.”

Such agreement would be “unjust” if “undue pressure is brought to bear on the mother” or if used “primarily to protect the reputation of the priest or the institutional Church by creating a veil of secrecy,” they said.

In an open letter endorsing the work of Coping International, Archbishop Martin said it was there “to help, free of charge, any child of a priest who wishes to come forward.”

Peter Murphy, son of the late Bishop of Galway Eamonn Casey, told the Boston Globe recently that disclosure in 1992 of who his father was meant instant celebrity. He was 17–years–old then and living with his mother Annie Murphy in Connecticut in the US.

In a Spotlight article about Coping International Mr Murphy said: “I talked to an Irish (reporter) in the morning and went to school and thought, ‘OK, that will be it.’ But when I came home, I’d say there were more than 100 reporters slathering round our condo complex,” he told the Globe.

The Irish reporter he spoke to was Conor O’Clery, then Washington Correspondent of this newspaper.