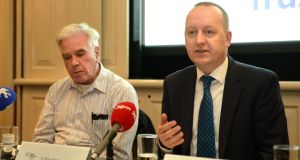 Affordable and social housing must be urgently provided in order to avoid a housing “catastrophe” in the near future, Fr Peter McVerry has warned.

The Peter McVerry Trust is calling on the State to prioritise the provision of housing rather than placing people in emergency accommodation and has recommended that a body be established to address the problem that is independent of the political system.

The trust also underlined the need for additional educational and mental health funding for the children and young people under 24 who make up nearly half of the homeless population.

The housing and homeless charity said the Government’s Rebuilding Ireland policy, which aims to eliminate homelessness and to address the housing shortage, is not working.

“There is nothing in Rebuilding Ireland to prevent more families becoming homeless,” said Fr McVerry at the launch of the charity’s pre-Budget submission. “The only thing is a 4 per cent cap on rent increases.... whose wages are going to go up by 12 per cent over the next three years?”

He added: “I keep waiting to see will the homeless figures stabilise or even reduce but the reality is that every month for the last four years the number of homeless people has simply gone up. We need to call this an emergency. We had a disaster in Donegal a week ago and an emergency was called. We need to do the same with the housing crisis.”

The charity has called for punitive measures to be implemented to ensure the 186,000 empty houses and apartments across the State are brought back into use. He added that local authorities had a responsibility to coordinate public housing programmes.

“Local authorities are scared of social housing. If they plan social housing there’s going to be huge local opposition. And local councillors depend on local people for getting re-elected.”

Fr McVerry highlighted the knock-on effect on housing prices if multi-national companies with high paid employees choose to relocate in Ireland in the wake of Brexit.

The trust’s chief executive Pat Doyle urged the Government to focus on keeping families in their homes and to “stop the trend of repossessions”. He said public housing construction should prioritise the development of smaller housing units rather than three or four bedroom houses.

“The latest rapid build technology is steel framed units that can turn units around in two months. That’s the type of programme we need.”

Mr Doyle said the recently announced plans to build more than 8,000 homes on the outskirts of Dublin should include 10 per cent of the homes being set aside for social housing, 20 per cent as affordable housing and the rest for the private rental market.