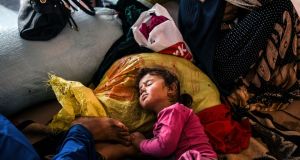 The Government must increase overseas aid spending by €128 million this year to keep on track with its financial targets and continue providing support to the world’s poorest people, the association for Irish NGOs has said.

The Irish State is falling behind on its UN commitment to spend 0.7 per cent of the nation’s Gross National Income (GNI) on overseas development aid despite economic recovery in recent years, according to the pre-Budget submission from Dóchas, the network of Irish overseas development NGOs.

The group said on Tuesday that despite the Government’s attempts to maintain development aid spending during the economic downturn, Ireland has begun falling behind on its aid commitments.

Last year the State spent €723.7 million on overseas aid, significantly more than its original 2016 commitment of €641 million, which increased after additional allocations to the EU development cooperation fund.

However, Dóchas, which represents 60 NGOs working in international development in Ireland, says the Government must further increase its aid budget by €128 million in October to ensure it remains on track to meeting its UN commitments.

“The aid budget is known to improve the lives of the world’s poorest and most marginalised people,” said Dóchas chief executive Suzanne Keatinge.

“At a time of unprecedented political, economic and social upheaval globally - with 128 million people in 33 countries currently in need of humanitarian assistance, and 65 million people displaced from their homes by war and conflict - it is more important than ever that countries like Ireland play their part.”

In order to meet its 0.7 per cent UN commitment in the upcoming budget, the State would need to allocate €1.428 billion to overseas aid, according to Dóchas.

Asked where the Government could cut spending to meet the additional aid payments, a spokeswoman for the group said she could not specify how savings could be made in other areas of the budget.

“If the 0.7 per cent target were to be met, we would be talking about as little as 70 cent in every €100 being spent on aid. For us, it is about seeing budgetary decisions made that put the poorest and most marginalised people, in Ireland and overseas, at the heart of Government policy.

“It’s about the Government prioritising issues of fairness, equality and justice when they are making budgetary choices.”

In 2000, the State agreed that by 2015 it would spend 0.7 per cent of its gross national income on development aid under the UN Millennium Development Goals (MDGs). This commitment was extended by 10 years to 2025 after the State failed to meet its 2015 target.*

Last year, the Irish Government also committed to implementing the 17 Sustainable Development Goals, which replaced the MDGs and are designed to end extreme poverty, fight inequality and injustice and combat climate change by 2030.