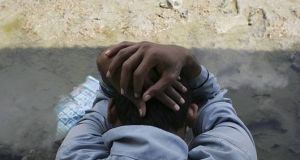 ‘He went through primary school in isolation, quite depressed, having temper tantrums, confusion, anxiety. No parent talks to us because of him. He has no friends.’ Photograph: Getty Images

A family who say they are unable to cope with a 16-year-old son with Asperger’s and Autism Spectrum Disorder have complained that the authorities have placed him in a homeless hostel rather than an appropriate care setting.

Tom, not his real name, said his son had a breakdown, and that the homeless shelter in Dublin city centre was not the appropriate place for him.

“He is kicked out at 9am and cannot go back in until 5pm,” said Tom, who is concerned about his son mixing with drug addicts.

“He needs to be in supervised care. He is vulnerable and he was caught with weed that he had been offered. It’s only a matter of time before he’s offered something else.”

The teenager – John (a pseudonym) – was only diagnosed at age 12 with Asperger’s and Autism Spectrum Disorder. “They gave him medication and they said, ‘here is a leaflet’ and they sent us on our way.

“So he went through primary school in isolation, quite depressed, having temper tantrums, confusion, anxiety. No parent talks to us because of him. He has no friends.”

Tom acknowledges that “yes, there are family issues”.

“His mother and I split up. I’m remarried and she has another partner. When he was in primary school teachers blamed us, his parents, for being separated.”

The teenager attempted to cut his throat in one of his fits at the age of 13 or 14 and that was flagged to authorities at the time. “They said that they had a chat with him at the time and they didn’t see any danger.”

Their son was suffering from such bad anxiety and bullying that he did not go back into secondary school last year for transition year. About three weeks ago, while living with his mother “he went really bad, he just lost it”.

“It’s like dealing with Jekyll and Hyde. He was roaring and shouting and kicking walls and he didn’t know why. My son has a psychiatric problem. He needs help, and there is no help out there.”

Gardaí were called, and John was arrested. He was then placed in the homeless shelter on July 24th, and has been there since apart from one night when he went back to his mother’s house but again “lost it”.

A counsellor had been appointed to work with the family, and recommended a temporary structured care setting for the teenager, and individual mediation for his parents, “while we are learning to cope”.

“Tusla have allocated somebody to be with him for 10 hours a week during the day until the hostel opens at 5pm.”

Tom adds: “His mother is close to a nervous breakdown and my wife is too. We are four broken parents. We need help.”

Tom believes “if my child had physical problems, had spina bifida or cerebral palsy he would be helped, but because he has a mental health problem it’s like he’s invisible to the HSE”.

He said a Tusla supervisor had told him staff “are not childminders and are not there to give parents a break from childminding”.

A spokeswoman for Tusla said the agency could not comment on the specifics of individual cases.

“Tusla endeavours to retain the child within their family, with their community, at all times where this is appropriate, and the local Tusla team would actively engage with the family to put a plan in place to offer supports to the family,” the agency said in a statement.

“One of the key principles of child protection and welfare is that children should only be separated from their parents/guardians when alternative means of protecting them have been exhausted.

“An inter-agency approach to child protection is of paramount importance so that children in need of support receive a timely, appropriate and proportionate response.

“The involvement of agencies in a child’s life varies on a case-by-case basis, and depends on the individual needs of a child and family.”