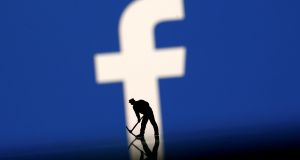 Currently, 96 Facebook posts have been identified as paid advertisements as of March 19th.

Almost 100 Facebook posts related to the abortion referendum and targeted at Irish users have been identified as having been paid for.

The Transparent Referendum Initiative, run by a group of volunteers, provides a tool to users of the social network to identify posts they are seeing that have been paid for, and are de facto advertisements.

The group is building a database of such posts or advertisements ahead of the referendum on the Eighth Amendment in May so voters can scrutinise the information they are shown on Facebook.

Social media advertisements can be highly targeted based on a person’s location, demographics and interests, and in many cases it is not clear the post has been paid for.

“If this tool didn’t exist, we would not know these posts were ads,” Liz Carolan, one of the founders of the initiative, told The Irish Times.

“The post doesn’t say it’s an ad. A post will only tell a user it’s an ad if the user sees it in the moment when it’s been put in front of them because a payment has been made for it to be in their Facebook feed.

Ms Carolan said the software works by capturing Facebook ads and storing them on the database. “It captures every ad and some metadata around it,” she said. “We then filter them by looking for key words to identify ads that relate to the referendum.”

Currently, 96 posts have been identified as paid advertisements as of March 19th. Most of them have been paid for by groups actively campaigning for one side or the other. A number of political parties and individual politicians have also paid for advertisements.

Three political parties - People before Profit, Renua Ireland, and the Social Democrats – feature in the database.

Other organisations include UCD Students’ Union, which paid for a post on January 30th that featured a message from its president Barry Murphy welcoming the commitment from Taoiseach Leo Varadkar to hold a referendum before the summer.

Elsewhere, the Radiance Foundation, which describes itself as an “educational, faith-based, life-affirming organisation” on its website, also paid for a post.

The foundation is based in Virginia in the United States and claims to have been featured in a number of media outlets including Breitbart News, Fox News, and the Christian Post.

A group called Rachel’s Vineyard is also on the database. It describes itself as a “support group model for counsellors, offering a very concrete, emotional experience for women who were grieving the loss of their aborted children”.

The Karen Gaffney Foundation, “a non-profit organisation that is dedicated to championing the journey to full inclusion for people with Down syndrome and other disabilities”, also paid for a post.

Currently, about 260 people are using the tool and contributing to the database, which only gives a flavour of the organisations and individuals behind targeted Facebook advertisements related to the referendum.

Ms Carolan said these individuals were not selected but volunteered to contribute using the WhoTargetsMe plugin. “We emailed all the major campaigns and asked them to share details of how people could get involved with their mailing lists,” she said.

“We’ve done a lot of tweeting about it, and mentioned it in all our media engagements to try and get the word out. We want to grow more because the broader the range of people we have, the better.”

The database is not an exhaustive list, nor can it be relied upon for statistical analysis. Ms Carolan estimated that 500-1,000 users will be required “to get a comprehensive view and to begin to draw conclusions”.

“We need more to be able to say anything statistical or look for trends,” she said. “But what we do know is that every one of these posts was paid for and targeted Irish voters ahead of the referendum.”