Calls for investigations into management of Galway direct provision centres 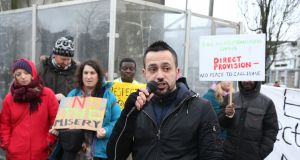 Joe Loughnane of Galway Anti-Racism Network speaking in Galway in January during a march and rally calling for an end to Ireland’s Direct Provision system. Photograph: Joe O’Shaughnessy

A Galway anti-racism grouping has called for investigations into management of the city’s two direct provision centres for asylum seekers.

The Galway Anti-Racism Network claims that a man living in one of the two centres was forced to find emergency accommodation on the eve of Storm Emma early this month after he complained that staff had refused to serve him food.

The man, who says he cannot be named while his application for asylum is still being considered, is from an African state. He has been in the direct provision system in Ireland for almost a decade and has been moved around a number of centres.

He told The Irish Times he had to seek emergency winter accommodation provided by Galway’s homeless services after being asked to leave the Great Western Hostel in the city centre just before the blizzard associated with Storm Emma on March 1st.

The Great Western Hostel near Eyre Square, for male asylum seekers only, is one of two direct provision centres still open in Galway, along with the Eglinton, which accommodates families, in Salthill.

A third centre, Lisbrook House, in a former Ibis hotel close to the Headford Road, was closed in late 2012 after protests over conditions.

The Galway Anti-Racism Network was founded by Renmore native Joe Loughnane who has been selected as a People Before Profit election candidate.

The network claims asylum seekers in Galway are being “intimidated and threatened” to discourage them from attending the network’s weekly community meetings.

The network believes employees at the two centres may be “violating asylum seekers’ human rights”, and says that the Department of Justice and the Irish Human Rights and Equality Commission should conduct an immediate review.

Two months ago, several asylum seekers who attended a protest hosted by the network over the limitations on the right to work spoke of very difficult conditions.

One resident of the Eglinton, who said she could not give her name in case her asylum application was jeopardised, described how some residents had been there for up to 11 years.

“People are dying inside,”she said. She related the reality of sharing a bedroom with two other women, one of whom has mental health issues, and said that many people were on medication to help them cope.

“There should be a six-month system of assessment – leaving people without a decision for five or 11 years is not good, not kind,”she said.

The network also says that “serious concerns persist” about the amount of profit earned by the centres’ private owners from the taxpayer-funded programme.

The State paid more than €50 million last year to the owners of 34 centres, it noted.

The Department of Justice said that the Reception and Integration Agency (RIA) was “not aware of any specific allegations of intimidation by management in centres in Galway”, and could not take action “in the absence of a specific allegation about a particular incident”.

The department said there is “an established complaints procedure in place in all accommodation centres”.

“The first step is to inform local management. If there is any substance to these allegations, then this is obviously not an option in this instance. The next step is to inform RIA itself,” it said. The step after this involved informing the Ombudsman.

The department said that while the procedure was “generally linear”, there was no prohibition on a person going straight to the RIA or the Ombudsman, “as the case may be”.

“RIA takes the safety of its residents very seriously and is willing to listen to any specific complaints and act accordingly,”the department said.

Mr Loughnane said the network had sent information to the RIA, but it “never really responds to us”.