‘Politicisation’ of expensive drugs has led to cuts in community care, committee told 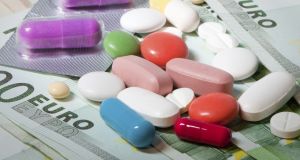 ‘We spend €700 million on high tech drugs. We spend €1.4 billion on all other pharmaceutical products. It’s astronomical’

The “politicisation” of some very expensive drugs which may or may not work, has “led directly” to cuts in valuable community services, the Irish College of General Practitioners (ICGP) has said.

Spokesman Dr Mark Murphy told the Oireachtas Committee on Health on Wednesday it was time to “get honest” about “high tech drugs”, which he described as “astronomically expensive”.

“We have to prescribe cost-effectively. When we spend somewhere we lose out somewhere else. We spend €700 million on high tech drugs. We spend €1.4 billion on all other pharmaceutical products. It’s astronomical.

“It is very upsetting when homecare packages in the community - one of the most valuable interventions you can make to keep people at home [are cut]. We can’t afford home-care packages, but we can afford medications at astronomical costs with very little benefit.

“Some drugs have a definite cost-effective benefit. Some drugs do not, and we can work that out. The politicisation of certain drugs has directly led to the reduction of community-based care, and we need to get very honest about that as a society. We only have one budget in healthcare and we need to get bang for our buck.”

Although Dr Murphy did not name any drug, among those that have been controversial have been Respreeza, used to treat a lung condition known as Alpha-1, costing €81,000 per patient per year; the cystic fibrosis drug Orkambi at €159,000 per patient annually; and leukaemia drug Ibruntinib (€73,000).

Dr Murphy also called for a ban on radio and newspaper advertising by private hospitals and pharmaceutical companies. Some of the adverts list symptoms people may have, then suggest a condition they may have and encourage them to “talk to you GP”.

“General practitioners are extremely frustrated with the manipulation, with the erroneous marketing [and] advertising on radio and on paper, by private hospitals, by pharmaceutical companies targeting vulnerable patients. . . . It is an absolute disgrace,” said Dr Murphy.

Such advertising was promoting an “over-medicalisation of our society” and the agenda of those behind the ads was causing harm, he told the committee.

“We really need to think long and hard at a State level about the harm that is happening because of this agenda. It is very upsetting as a GP to see the anxieties and frustrations visible in our waiting rooms [caused by the advertisements].”

Fine Gael TD Kate O’Connell, TD agreed, saying she was surprised when she heard such advertisements in Ireland as she thought they were confined to the United States. She too said such adverts should be banned.