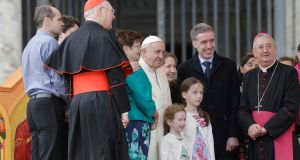 Pope Francis with Cardinal Kevin Farrell, second from left, Dublin Archbishop Diarmuid Martin, right, and a group of families from Ireland, at the Vatican on Wednesday. Photograph: Andrew Medichini/AP Photo

It will come as no great surprise that Pope Francis’s visit to Ireland in August will, at two days, be relatively brief. It could be due to his age – he is 81 – but where Europe visits are concerned, the pope does not stay around for long.

His first European trip as pontiff was to Albania in 2014. It lasted a day, as did a visit to Bosnia Herzegovina in 2015 and a voyage to Lesbos in Greece a year later.

In 2016, a planned day-long visit to Sweden was extended to two after intense persuasion by Swedish Catholics that the pope also say Mass in Malmo. He also spent two days in Fatima, Portugal, last year.

The 2016 World Youth Day events in Poland were an exception to the “rule”, with the pope staying from July 27th to 31st. However, the event is generally attended by the pope and in this case, it took place in the home of Pope John Paul II, who started it back in 1985.

So Ireland, or rather Dublin, is not doing too bad in persuading Francis to stay around for most August 25th and 26th for the World Meeting of Families. The pope has, of course, been here before. He spent three months at the Jesuit Milltown Institute in Dublin in 1980, in a none-too-successful effort to master English.

As for his agenda, all we know now is that he will attend the Festival of Families event at Croke Park on August 25th. This is a “concert-type event” celebrating “family life around the world that will feature musical and dance performances, as well as five selected families from around the world giving witness to their family’s faith”.

He will celebrate the final Mass of the world meeting at the Papal Cross in Phoenix Park on August 26th. This is where Pope John Paul II celebrated Mass in September 1979 before a crowd estimated to be a million strong.

The crowd this time is unlikely to reach that level, but tickets for both events will be free and can be bought through the World Meeting of Families website.

The pope is expected to take in other Dublin venues and Archbishop of Dublin Diarmuid Martin, who is hosting the world meeting, has noted that wherever the pope goes he visits a prison, “which he feels very strongly about”.

He also felt the pope would appreciate the work of Br Kevin Crowley at the Capuchin Day Centre, which supports Dublin’s homeless and poor.

During the last papal visit, John Paul II was expected to stop at the church of Our Lady of Lourdes on Seán Mac Dermott Street but due to a tight schedule, he was whisked through the area to an event in Dublin Castle.

Other details of Pope Francis’s itinerary are yet to be worked out but would likely include a courtesy meeting with members of the Government and Opposition. Taoiseach Leo Varadkar yesterday said he looked forward to greeting “a welcome guest”. He said: “While the visit was not a formal State visit it is the visit of a head of State and the spiritual leader of one billion Catholics and millions of Catholics in this country.”

It is expected the pope will spend the night of August 25th at the papal nunciature on Dublin’s Navan Road. Speculation about him visiting the North seems to have been just that, but theoretically it may be a possibility. However, continued stalemate at Stormont would mean there might be no political representatives to meet him and such a trip would also require UK authorities to get involved. Should he visit the North, Armagh is the most likely destination given its status as the ecclesiastical capital of Ireland. However, it seems he may not venture beyond Dublin before returning to Rome.

Confirmation of the visit on Wednesday will delight the Irish faithful and organisers of the world meeting. The Catholic bishops were updated on preparations by the event’s secretary general, Fr Tim Bartlett, earlier this month. He said only about 5,500 pilgrims had registered from 64 countries, there was a need for more volunteers and host families in the greater Dublin area for visiting pilgrims.

This announcement should increase interest and will be sweet music to the ears of those involved.