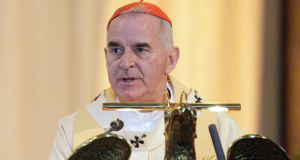 Cardinal Keith O’Brien: recused himself from the 2013 Vatican conclave that elected Pope Francis.

Funeral arrangements for Antrim-born Cardinal Keith O’Brien (80), who died on Monday, have yet to be decided by the Vatican.

Former Archbishop of St Andrews and Edinburgh in Scotland, he resigned in 2013 following admissions of inappropriate and predatory sexual behaviour with seminarians and young priests. In 2015 he renounced all rights and prerogatives of his cardinalship.

Because of this neither his former archdiocese nor the Catholic church in Scotland will have a significant role in decisions as to where he will be buried or the kind of funeral service he will have.

Although he retained the title of cardinal, he was prevented from participation in public ceremonies and had been exiled to the north of England. He died in Newcastle upon Tyne after breaking his collarbone and injuring his head in a fall last month.

Cardinal O’Brien recused himself from the 2013 Vatican conclave that elected Pope Francis. It was a decision then considered unprecedented, but which many believe was ordered by Pope Benedict XVI.

In February 2013, just a week after Pope Benedict announced he himself was resigning, three priests and a former priest told the Observer newspaper in the UK that Cardinal O’Brien had made sexual advances to them in the 1980s. One was said to be in a long-term relationship with the Cardinal.

Initially denying their accounts, Cardinal O’Brien issued a statement the following month acknowledging that his sexual conduct had “fallen below the standards expected of me as a priest, archbishop and cardinal”.

A subsequent Vatican inquiry revealed other allegations against him.

Publicly, however, Cardinal O’Brien had vigorously opposed the legalisation of gay relationships. In January 2006 he criticised Westminster MPs over the introduction of civil partnerships in the UK. In July 2006 he opposed proposals that would require Catholic adoption agencies to place children with homosexuals in the same way as with heterosexuals, calling them totalitarian.

In December 2011 he reiterated Catholic Church opposition to civil partnerships, saying:“The empirical evidence is clear, same-sex relationships are demonstrably harmful to the medical, emotional and spiritual wellbeing of those involved, no compassionate society should ever enact legislation to facilitate or promote such relationships, we have failed those who struggle with same-sex attraction and wider society by our actions.”

In 2012, the year before he resigned, Cardinal O’Brien criticised UK government proposals to introduce same-sex marriage as “madness” which would “redefine society since the institution of marriage is one of the fundamental building blocks of society”.

That same year LGBT rights charity Stonewall in the UK awarded Cardinal O’Brien the title Bigot of the Year.

Cardinal Keith Michael Patrick O’Brien was born on St Patrick’s Day 1938 in Ballycastle, Co Antrim. The family moved to Scotland where his father served with the Royal Navy, eventually settling in Edinburgh.

Ordained in 1965, he was appointed Archbishop of St Andrews and Edinburgh in 1985. He was elevated to the College of Cardinals by Pope John Paul in 2003 and was the third Scottish cardinal since the Reformation.