Pope Francis announces he will visit Ireland this year

Pontiff to preside over World Meeting of Families closing ceremony 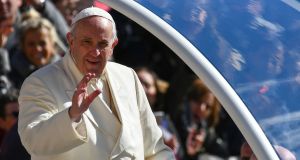 Pope Francis waves to faithful upon his arrival in St Peter’s square in Vatican, for his weekly general audience on Wednesday. Photograph: AFP/Getty

Taoiseach Leo Varadkar has said he looks forward to greeting Pope Francis when the Pontiff visits Dublin in August.

Mr Varadkar said in the Dail that “while the visit was not a formal State visit it is the visit of a head of State and the spiritual leader of one billion Catholics and millions of Catholics in this country”.

The Taoiseach was responding to a question from one of his party members Fine Gael TD Tony McLoughlin who asked him for an update on the Pope’s visit.

Mr Varadkar said “he is certainly a welcome guest and I look forward to greeting him during his visit”.

He added: “There will be appropriate involvement of civil authorities including security, public safety, protocol and co-ordination.”

Pope Francis said on Wednesday he will make the first papal trip to Ireland in nearly 40 years, visiting Dublin August 25th and 26th for a Church meeting on families.

The brevity of the visit means it is unlikely he will make any trip to Northern Ireland or anywhere outside the capital.

The World Meeting of Families is taking place in Dublin from August 21st-26th. The pope will preside at the closing ceremonies on the final two days.

He will arrive in Dublin on Saturday August 25th for the concluding events of the World Meeting of Families and be chief celebrant at the final Mass of the event in Dublin’s Phoenix Park on Sunday August 26th. Full details of the visit are to be released later.

In a statement the Irish Catholic bishops said “Pope Francis, who is 81 years of age, will arrive in Dublin on Saturday, August 25th, and will take part in the ‘Festival of Families’ in Croke Park.

They describe the Croke Park event as a “faith-based cultural concert”.

“The next day, Sunday August 26th, Pope Francis will be the chief celebrant at Holy Mass in the Phoenix Park and this liturgy will bring to a conclusion the World Meeting of Families 2018,” the bishops added.

Archbishop of Dublin Diarmuid Martin, President of the World Meeting of Families 2018, said: “We eagerly await the visit of Pope Francis which no doubt will be an occasion of spiritual renewal for our laity, religious and clergy as well as a strengthening of Christian family life.”

The Tobin family are from Co Kildare and the Bushell family are resident in Rome. The delegation was led by Archbishop Martin, Fr Timothy Bartlett, Secretary General, of the World Meeting of Families 2018. The group also included the iconographer Mihai Cucu.

The WMOF is an international celebration of faith bringing together a large number of Catholic families from across the globe to interact, pray and reflect on the central importance of marriage and the family as the cornerstone of our lives, of society and of the Church.

A National Opening of World Meeting of Families will take place on August 21st simultaneously in each of the 26 dioceses on the island of Ireland. From the 22nd 24th of August, a three-day pastoral congress will be hosted in the RDS .

The Phoenix Park mass will be celebrated by Pope Francis and involving what are expected to be hundreds of thousands of pilgrims from Ireland and around the world.

The papal visit is not expected to draw anything close to the crowds seen in 1979 when Pope John Paul II visited the Republic. On September 29th 1979, the first day of that visit, more than a million people gathered for the papal Mass in Phoenix Park, believed to be the largest gathering of Irish people in history.

Meanwhile the Association of Catholics in Ireland (ACI) has said it “strongly supports Pope Francis’s desire” to make the World Meeting of Families event “an inclusive occasion, open to all”.

In a statement it said: “everyone who supports this approach will be concerned by recent interventions by some conservative elements in the church who appear ready to obstruct the inclusive and compassionate approach advocated by Pope Francis.

“We must act to ensure that those in our church and our society who feel marginalised and unwanted have a forum where they can articulate their particular concerns and describe the realities of life for their families in Ireland today - a forum where they can speak freely, knowing that they will be heard with compassion and respect.”

The ACI announced a public event for Saturday, April 14th at the Hilton Hotel, Charlemont Place in Dublin. “We have invited speakers who will represent family groups of all backgrounds and circumstances - those separated and divorced, disenfranchised youth and homeless families, victims of abuse and those marginalised or estranged by society and the church, including members of the LGBT community,” it said.

The ACI is made up of lay Catholics and is committed to the pursuit of a reform and renewal agenda in the Irish Catholic Church based on the letter and spirit of Vatican II.