Taoiseach raises prospect of changes to rules on mortgage lending 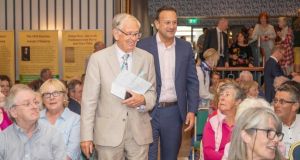 Taoiseach Leo Varadkar has raised the prospect of the Central Bank changing rules on mortgage lending to cover people paying high rents while also saving for a mortgage deposit.

The rules, introduced by the Central Bank in 2015, curtail mortgages to 3.5 times a buyer’s salary and to a minimum deposit of 10 per cent from first-time purchasers and 20 per cent from other buyers.

Banks are allowed discretion on a certain volume of lending, allowing borrowers higher loan-to-income and loan-to-value figures, but these loans are quickly snapped up.

The Central Bank’s loan-to-income and loan-to-value mortgage caps were put in place to prevent over-borrowing by house-hunters and to prevent promiscuous lending distorting the property market.

Speaking to the MacGill Summer School in Glenties, Co Donegal, however, the Taoiseach raised the prospect of tweaking the rules to make it easier for those paying rent while accumulating a deposit.

Defending the Government’s housing policies, he said this could be done against a backdrop of increasing housing supply: “People in 2003 or 2004 were able to buy homes in their 20s and 30s.

“That is now very difficult for people. We have a lot of people who are now paying more in rent than they would pay for their mortgage and there is a real mismatch there.

“House prices are still 20 per cent lower than they were 12 years ago and they are levelling off, they are even falling a bit in Dublin but rents are at record highs,” he said.

Many people “are now really stuck in a rent trap, where they could well afford a mortgage but they can’t find a property because they are not available, because of lack of supply.

“I do think one aspect of the mortgage rules that is very tough is the fact that you are expected to show that you are saving at the same time that you are renting.

“But of course if you didn’t have to pay a rent of €2,000 a month you would be able to save. I know the Central Bank is independent and I know it is going to look at these things but as supply increases, I would hope they would consider changes in that are so people can get out of that rent trap and be able to buy.”

He said he bought his own apartment while he was in his 20s, at a time when 100 per cent mortgages were available, adding that he believes in home ownership.

“I am somebody who was able to buy my first apartment, still live in it and I bought that when I was in my mid-20s and that wasn’t unusual.”

Mr Varadkar was speaking as the latest Central Bank figures showed that nearly a quarter of all mortgage borrowers last year were given permission to breach lending ceilings.

Exceptions for first-time buyers were typically given to single-applicant buyers living in Dublin, with lower to mid-range incomes, according to the Central Bank’s Financial Stability Note.

In Dublin, people on lower incomes were given permission to break loan-to-income exceptions to draw down mortgages that would be beyond them under the existing rules.

Outside Dublin, some borrowers are getting permission to draw down bigger mortgages after being granted permission for larger loan-to-value mortgages than they would ordinarily be entitled to.