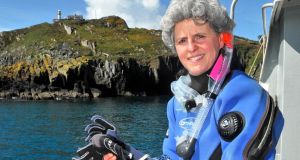 Rianne Smith, who runs Aquaventures diving school in Baltimore in Co Cork: “Our broker told us he was finding it hard to renew our insurance.” Photograph: Provision

Diving companies and schools in Ireland are facing major problems in getting insurance because specialist British-based insurers are reluctant to offer quotes.

Ireland’s compensation culture is cited as a major reason to ditch policy-holders in Ireland, but the political instability caused by the United Kingdom’s impending departure from the European Union is cited by some.

Dutch national Rianne Smith, who runs Aquaventures diving school in Baltimore, west Cork, has never had a claim made against her 22-year-old company.

Ms Smith, who came to Ireland in 1996 with her husband Jerry and made it her home, said they first realised in May that their insurance premium was going to be a problem this year.

“The industry has always attracted huge premiums even though we have never had a claim. Our own broker told us he was finding it hard to renew our insurance and we were going month to month with the insurance while he tried to find someone else.

“Our boats are fully compliant with regulations. All dive centres have been hit with the withdrawal of cover on their boats because of Brexit.

“Fáilte Ireland is very keen on promoting the Wild Atlantic Way. But if we can’t get insurance we are facing in to problems.”

She said they will now have to attempt to get insurance in Ireland with an anticipated 40 per cent price hike.

Ms Smith is also concerned about the future importation of diving equipment from the UK.

“Even though it is manufactured elsewhere it comes from UK agents. We don’t know what is gong to happen there.

“At the peak of the boom Ireland had 40 diving centres. Now there are just seven. All seven operators are being left without insurance from the UK.”

Meanwhile, Donald Cullen, owner of Mevagh Diving in Letterkenny, which offers scuba training and wreck diving, says they are now unable to get insurance in the UK.

“The insurance companies aren’t interested in Ireland. Brexit isn’t helping and they are also talking about the claims culture in Ireland. We have never had a claim. They are saying that claims are costing too much from Ireland.

“Ninety per cent of all of our diving equipment also comes from the UK. We have an order due in next week and they say they don’t know what is going to happen with Brexit.”

Mr Cullen says that the diving season lasts from June until September and that all of their money for the year needs to be made during that period.

“Divers come from all over the world and we are going to have to ask them to pay more, which we don’t want to do.”

However, Broker Nick Caldwell of Westfield Sub Aqua and Marine Insurance Services of Guildford, Surrey, said Brexit was complicating the situation but could not be blamed for the problems facing the industry in Ireland.

Instead, he said, Lloyds of London had pulled out as underwriters of the entire marine industry in the UK, which was impacting on their customers there and in Ireland.

Meanwhile, British companies who insure the leisure market in Ireland are quickly pulling out of the market.

Last week, UK operator LeisureInsure announced its intention to cease all renewals from Ireland by the end of this month.

The withdrawal has hit play centres, paintballing and adventure centres.

It is understood that the possibility of a crash-out Brexit has made many insurers in the UK review operations in the Irish market.