Lowest expenses of just under €120,000 were incurred by Peter Casey who came second 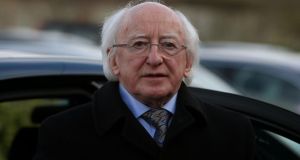 President Michael D Higgins outspent his nearest rival by over €100,000 in last October’s presidential election, the official report on the poll has disclosed.

Mr Higgins spent a total of €367,000 in his successful effort to win a second term in Áras an Uachtaráin.

A source close to Mr Higgins campaign said last night the figure of €110,000 for personal spending by the President was disclosed at the outset of the campaign.

The actual figure for personal spending , including loans taken out, exceeded the reimbursment of €200,000, said the source, therefore donations will not be reimbursed.

The Standards in Public Office Commission’s report on the election published on Wednesday shows a a total spend of €1.36 million by all candidates.

The second highest spender was independent Joan Freeman who spent €253,000 in total, according to SIPO.

The lowest expenses incurred were by Peter Casey, who came second in the race. His total spend was just short of € 120,000. The sixth candidate Gavin Duffy spent a total of € 163,000.

The legislation governing election spending has been criticised for its opacity by SIPO in the past. As in previous elections, the report can only give a partial picture of how each candidate raised their funds.

An individual who donates can do so anonymously if the keep their contribution to €600 or below. The upper allowable donation for an individual is €1,000.

Mr Higgins’ election agent Conor Power reported declarable donations of € 41,300. That was comprised of 40 individuals who contributed the maximum of € 1,000 and two who contributed just over €600 each.

Sean Gallagher’s returns show €9,000 in declarable donations while the other three candidates – Mr Duffy, Mr Casey, or Ms Ni Riada – reported they received no individual donations over the €600 threshold.

The bulk of spending by candidates was on election materials such as brochures and flyers, with Mr Gallagher spending €170,000 on these items. Mr Higgins was second in this regard, spending €143,000.

Mr Higgins was by far and away the biggest spender on advertising, spending almost €50,000. The second highest spender in this regard was Peter Casey, who spent €25,000.

There were high spends almost across the board for publicity, with Mr Duffy (€52,000), Ms Freeman (€61,000) and Mr Casey (€42,000) all hiring professional advisors. The spend for Mr Higgins, Mr Gallagher and Ms Ni Riada was more modest as they availed of volunteers.

Mr Casey financed his own campaign while Mr Higgins responded to an RTÉ questionnaire during the campaign by saying he would be contributing between €100,000 and €110,000 of his own savings to the campaign. The rest of his money was raised through an online campaign, which raised close to €50,000, and through other smaller donations.

It is unclear how the reimbursement to the two candidates will be treated by their campaign. Members of his campaign team were not available for comment on Wednesday.