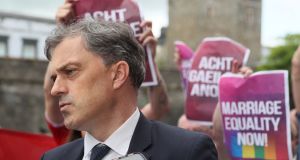 Northern Ireland’s new Secretary of State Julian Smith in Derry for his first visit to the region since his appointment. Photograph: Brian Lawless/PA Wire

Tánaiste Simon Coveney said the British and Irish governments and the North’s five main political parties were “very close” to striking deal to restore Northern Executive and Assembly, after his first meeting with the new Northern Secretary Julian Smith at Stormont on Friday.

Mr Coveney, after holding talks with 47-year-old Mr Smith at Stormont House, also said he believed the new Northern Secretary was a “man who can get things done”.

In a series of engagements on his first day in Northern Ireland as secretary of state Mr Smith also met Sinn Féin, the SDLP, the Ulster Unionist Party and Alliance. The DUP was unable to meet him for “logistical” and diary reasons.

The first impressions of Mr Smith from the political parties were reasonably positive. Party sources said he appeared to be “more clued-in” about the political stalemate in Northern Ireland and to have more “spark and energy” than his predecessor Karen Bradley.

Mr Coveney after his meeting with Mr Smith paid tribute to Ms Bradley and also spoke of some positive developments in the talks designed to reinstate Stormont, which have been running for three months.

“I think we are very close to having the basis for agreement but ultimately the parties have to buy into that,” he said.

“What has been put in place in the last 12 to 13 weeks is certainly a foundation that we can build on now, and I think we can do it relatively quickly. But ultimately that will be a call for the leadership of the five parties,” he added.

Mr Coveney balanced this optimistic note with the warning that the talks were not an “easy process” and that the polarisation in Northern politics was difficult to resolve.

The Minister for Foreign Affairs added, “We are now at a point where all five parties need to agree to accommodate each other on a broad-based deal across multiple areas that can be the basis of an Executive that can last, that can function and can work and withstand the strains and pressures that sometimes are part of politics in Northern Ireland. We are not there yet.”

Mr Coveney was also warm in his personal comments about Mr Smith, a former British government chief whip who in that capacity had regular dealings with the DUP to ensure that its confidence and supply agreement to keep the Tories in power was maintained.

He said, “I think he is a man who can get things done. He has a good reputation. We are the same age, and I think we will get on very well. He is very smart and I think he understands the political parties in Northern Ireland. He obviously understands the DUP very well because he has worked with them in London. But I think he is anxious to reach out to the other political parties too . . . We have got off to a very good and honest start.”

The four other parties have expressed concerns that Mr Smith could be a “Yes Man” for the DUP because of Boris Johnson’s dependency on the votes of the ten DUP MPs to keep his government in power.

The DUP East Belfast MP Gavin Robinson rejected any suggestions that the reason his leader Arlene Foster did not personally meet him on him in Stormont on Friday because he “already was in the pocket” of the DUP.

He said there was no face-to-face meeting on Friday because of “logistical” reasons. Mr Robinson insisted that Mr Smith would be an honest broker in the negotiations.

Mr Smith spent about an hour – the longest meeting of the day — with Sinn Féin leaders Mary Lou McDonald, Michelle O’Neill and Conor Murphy. Ms McDonald said she pressed for a border poll on a united Ireland and told him she hoped he would be the last Northern Secretary in Northern Ireland — a comment that he took with “good part”, she added.

She also gave him a copy of the Belfast Agreement which he had read and would reread. Ms McDonald was reasonably benign in her initial assessment of Mr Smith. “In a spirit of fairness you have to give a person a fair wind to read themselves into their brief, to get a handle on the issues,” she said.

SDLP deputy leader Nichola Mallon encouraged Mr Smith, along with the Irish Government, to publish a “best guess” paper on what would constitute a deal to restore Stormont, if the DUP and Sinn Féin could not reach agreement.

Ulster Unionist Party Assembly member Doug Beattie said “grip and grin” introductory session with Mr Smith was useful. “We made it absolutely clear to him that, no matter what his relationship is with the DUP, he cannot be a sop to their tantrums. He cannot be meek and mild in front of Sinn Féin intransigence, he has to bang their heads together,” he said.

“As somebody who fought for the withdrawal agreement and backstop, he could have a role in influencing government policy and that’s I suppose the most that we can hope for, in the current circumstances,” she said.

Sports clubs and political parties advised not to use WhatsApp 20:26
Talks to take place aimed at averting strike by home-help staff over pay restoration 20:23
Mother of three McGinley children appears in court charged with their murders 20:09
CAB raids homes in Cork and Kerry as part of international crime gang investigation 19:55
Gardaí carry out searches for remains of Keane Mulready-Woods 19:39
SUBSCRIBER ONLY