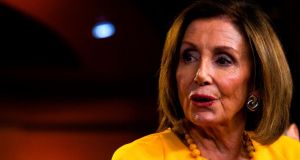 US House of Representatives speaker Nancy Pelosi: “We made it clear . . . there should be no return to a hard border on the island.” Photograph: Andrew Caballero-Reynolds/Getty Images

Nancy Pelosi, the speaker of the US House of Representatives, has warned Boris Johnson’s government that Congress would not endorse a trade deal if the Belfast Agreement was jeopardised by Brexit.

With no signs of any softening of positions in London, Dublin or Brussels and an increasingly likely no-deal Brexit in October, Ms Pelosi told The Irish Times in Washington the issue of Northern Ireland was foremost in the mind of US members of Congress as the Brexit process continued.

“We made it clear in our conversations with senior members of the Conservative Party earlier this year that there should be no return to a hard border on the island. That position has not changed. Any trade deal between the US and Great Britain would have to be cognisant of that,” she said.

Brexiteers have argued Britain will be in a position to strike a trade deal with the United States when it leaves the European Union. But any trade agreement must be endorsed by Congress. Ms Pelosi said during a visit to London in April that there would be “no chance whatsoever” of a US-UK trade deal if the Northern Ireland peace agreement was weakened by Brexit.

Her comments come as Mr Johnson on Thursday doubled down on his demand for the Northern Ireland backstop to be eliminated, telling MPs that he would negotiate with the EU only on that basis. But EU chief negotiator Michel Barnier rejected the demand as unacceptable and incompatible with the Brexit negotiating mandate agreed by European leaders.

In his first statement to the House of Commons as prime minister, Mr Johnson said Britain would leave the EU on October 31st, with or without a deal. He said he would prefer to leave with a deal but that the withdrawal agreement rejected three times by MPs could not form the basis of it.

He said his government was ready to negotiate an alternative to the withdrawal agreement but that the issue of the Border must be resolved as part of a future trading relationship after Britain left the EU.

He said he was “ready to meet and talk on this basis to the European Commission, or other EU colleagues, whenever and wherever they are ready to do so”.

Mr Johnson spoke briefly on Thursday to European Commission president Jean-Claude Juncker, who told him the withdrawal agreement was the only deal available. And in a letter to EU ambassadors, Mr Barnier rejected the British prime minister’s central demand and suggested Mr Johnson was seeking to sow divisions among the 27 remaining member states.

Taoiseach Leo Varadkar said he wanted to meet Mr Johnson “sooner rather than later” but reiterated that the backstop could not be dropped.

He said a “clear majority of people in Northern Ireland don’t want to leave the EU and they do want the backstop”.

He said he did not accept the charge that the backstop was “anti-democratic in some way” – a charge made by Johnson on Thursday.