Johnson’s first hours as PM closely watched in Dublin: what it means for Ireland 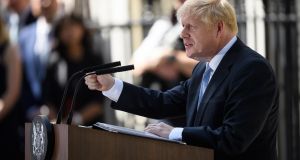 If Dublin was wondering which Boris Johnson would take office in Downing Street – the bugger-the-backstop arch-Brexiteer or the pragmatic City Hall centrist – Wednesday afternoon’s speech, his first as prime minister, will tilt the analysis towards the former.

Amid a typical effusion of bluster, optimism and ebullience – “The doubters, the doomsters, the gloomsters, they are going to get it wrong again. The people who bet against Britain are going to lose their shirts” – he gave notice that prime minister Johnson would sound just like candidate Johnson.

Touching on such diverse subjects as gene therapy, battery technology, blight resistant crops and a commitment to animal welfare, and promising increased investment in an array of public services, his core message was that Britain’s traditional reserves of pluck and courage would see it over any challenge presented by Brexit. Though characteristically, he declined to say how.

More important than all this guff, however was this: Johnson sent a message to Dublin and Brussels that he is seeking a deal he knows they will not be able to deliver.

Given Johnson’s record of U-turns and inconsistencies, we should perhaps not take anything he says, especially during these high-octane early hours and days, as the last word. But on the evidence of Wednesday’s speech, Johnson is not interested in a minor tweak to the backstop that might have unlocked a Commons majority for the Withdrawal Agreement, as some had hoped.

He repeated and re-repeated the pledge that the UK would exit the European Union on October 31st, deal or no deal.

The new prime minister suggested a deal was possible: “I say to our friends in Ireland, and in Brussels and around the EU, I am convinced that we can do a deal without checks at the Irish Border, because we refuse under any circumstances to have such checks, and yet without that anti-democratic backstop.”

However, he drew a distinction between the October 31st date for leaving and the actual separation from the EU rules and structures.

“We will need to get ready at some point in the near future to come out of the EU customs union and out of regulatory control fully determined at last to take advantage of Brexit”. This was interpreted in some quarters that Johnson will seek some sort of “standstill transition”, where the UK “pays to play” in the single market.

This would require the EU to reverse the position it has had since 2017. “Won’t fly,” said one high-ranking Brussels source.

The reaction in Dublin was similar, with one Government source dismissing the Johnson suggestions as “unicorns”, the Brexitese term for solutions which don’t exit.

On Wednesday evening, Taoiseach Leo Varadkar, after the customary niceties about looking forward to chinwagging with the new prime minister, delivered a curt dismissal of Johnson’s request for a new deal: a “whole new deal”, he said, was “not going to happen”.

The focus now moves to Westminster, which will be the battleground between Johnson and the anti-no-dealers in all parties, including his own, whose ranks will have been swelled by the victims of the Cabinet purge.

If, as many observers expect, the no-deal majority in the House of Commons asserts itself against Johnson’s policy, he will have little option but to trigger a general election, seeking a mandate for a no deal. If he loses, he loses power; if he wins he will be able to pursue the Brexit he wants. Among many possibilities currently considered in Dublin, it is noted that this could eliminate the role of the DUP.

Either way, it’s a heck of a gamble. As London broils in the overheated state of British politics, and of British statecraft, in the high summer of 2019, Dublin watches, half horrified, half fascinated.