Varadkar parries question of whether he trusts Boris Johnson 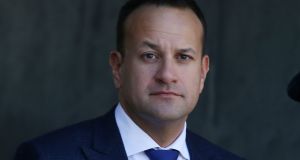 Leo Varadkar: hopes Mr Johnson ‘proves to be true to his word as’ Theresa May was. Photograph: Stephen Collins/Collins

Taoiseach Leo Varadkar has said he wants to meet UK prime minister Boris Johnson “sooner rather than later” to discuss Brexit, but confirmed there had been no contact yet between their two offices.

However, Mr Varadkar reiterated Ireland and the EU’s position that there can be no change to the backstop, leaving the EU and the UK on a collision course and heightening the expectation of a no-deal Brexit in October.

“All I can say is that I look forward to meeting the new prime minister to hearing the ideas that he has to secure an orderly withdrawal of the UK from the EU,” Mr Varadkar told journalists after the Cabinet meeting in Glencolmcille, Co Donegal, on Thursday.

He said Ireland required a “legally operable and legally binding assurance ... that no matter what else may happen as a consequence of Brexit, we won’t see the emergence of a hard border between North and South, we won’t see the North and the South drift apart in any way.”

“So I look forward to meeting with him. I look forward to discussing matters,” he said. He added that European Commission president Jean-Claude Juncker “very much reiterated the position of the European Union today, which is the position of Ireland – and that is that the withdrawal agreement and the backstop can’t be reopened but we are certainly willing to discuss what changes might be made to the political declaration that might assist with the ratification process,” he said.

This approach has already been rejected by Mr Johnson. Mr Varadkar reiterated that a Northern Ireland-only backstop “was always on the table”.

“I know that some people in Britain feel that the backstop was some sort of mechanism to tie Great Britain into the customs union and single market, but that was never the case, and if that is the concern, that can be provided for in the agreement and the declaration,” he said.

The Taoiseach said he was still confident a no-deal Brexit could be avoided. “It seems to me that there is a strong majority in the House of Commons that still wants to avoid no deal,” he said.

However, he said, that if a crash-out Brexit does occur, “nobody can blame Ireland or the European Union ... No-deal can only ever be a British decision.”

He said there had been no discussions with the British authorities about managing checks on goods coming into Ireland from the UK after a no-deal and there were “no plans to do that at present”.

Discussions were ongoing with the commission, he added, and he repeated the pledge to protect the EU single market.

“We will protect it,” he said, “and that does mean imposing tariffs on imports from Northern Ireland and from Britain, and it will mean checks, but we’re going to try to have those checks at ports of entry and at business level and random checks as well rather than having any physical infrastructure at the Border.”

Asked if he could trust Mr Johnson, the Taoiseach said he had only had one brief meeting with him and “it would be totally wrong of me to try to pass judgment on somebody who I haven’t really met yet and haven’t had a proper engagement with”.

However, he paid tribute to former UK prime minister Theresa May and said he hoped that Mr Johnson “proves to be true to his word as much as she was”.