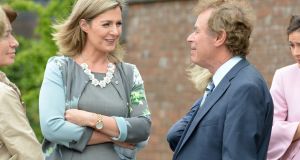 Fine Gael is split over Taoiseach Leo Varadkar’s decision to remove a committee chair from Maria Bailey, with some claiming he “bottled it” in not punishing her further over a controversial compensation claim.

Ms Bailey, a Dún Laoghaire TD, was stripped of her position as chair of the Oireachtas Committee on Housing, a post that is worth €9,500 a year, by Mr Varadkar.

He took the action following an internal party report into Ms Bailey’s claim against the Dean Hotel on Dublin’s Harcourt Street for falling off a swing.

A number of senior Fine Gael sources, spoken with independently, late last week indicated she was set to lose the whip in the Dáil.

“In not going further by removing the whip from Deputy Bailey, I do so conscious of the devastating effect this saga has had on Deputy Bailey and her family in particular,” Mr Varadkar said.

One senior Fine Gael figure, however, said there was “fury and disbelief” at the decision, adding: “He has bottled it.”

A TD said the “realpolitik” of tight Dáil numbers meant Mr Varadkar could not remove the whip, but he would have done so if the party was not in an extreme minority government.