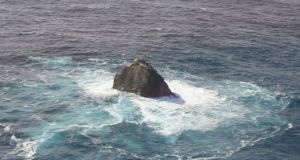 The row erupted last week after Scotland threatened action if Irish vessels continue to fish in the 12-mile (19km) zone around Rockall, an outcrop in the North Atlantic. Photograph: Irish Air Corps

Irish and Scottish officials have stepped up contacts in a bid to “de-escalate” tensions in the row over fisheries at Rockall, the Taoiseach has told the Dáil.

Leo Varadkar said the matter had been discussed on Tuesday by the Cabinet and by the Scottish government at their meeting.

“It has been agreed that a process of intensified engagement will take place led by senior officials from both administrations.

“I think it’s fair to say that both administrations would like to see this matter de-escalated.”

He said “dialogue is continuing between the Irish and Scottish governments there have been close contacts at official level over recent days to de-escalate tensions”.

Mr Varadkar told opposition TDs that the issue was not raised at his recent meeting in Dublin with Scottish first minister Nicola Sturgeon but it has been discussed by Tánaiste Simon Coveney and Minister for Agriculture Michael Creed and their counterparts.

“And the European commission has been informed of the matter,” he said.

Sinn Féin leader Mary Lou McDonald described the stance adopted by Scotland as “frankly bewildering” and called for the Taoiseach to go directly to Edinburgh to raise and resolve the issue.

“When you consider that Scotland will be regarded as an ally on the matter of Brexit,” she said, “If this is the stop adopted by an ally heaven help us if we have to consider the stance of those who are not an ally.

Fianna Fail TDs Pat ‘The Cope’ Gallagher and Margaret Murphy O’Mahony and Independent TD Michael Collins raised concerns about the Scottish threat to impound Irish boats fishing within a 12-mile zone of the rock in the north Atlantic.

Ms Murphy O’Mahony said “this is more important that just squid and haddock it’s about how fishermen are going to be treated through Brexit”.

The Taoiseach told them that “Rockall is a rock, essentially a sea stack in the middle of the Ocean. It’s, uninhabitable it’s uninhabited and I don’t think it’s something that Ireland and Scotland should fight over.”

He said “we don’ have a claim to it. We don’t accept any other sovereign claim on it. We think the fisheries and territory around it should be shared and the Irish vessel fishing in those waters have EU quota.

“These waters are part of EU waters and under the common fisheries policy we believe they are within their rights to continue to fish within the area around Rockall,” he said.

“The views of Ireland and Scotland have differed for some time but we have built up a strong and positive relationship,” he added.

But it was agreed that dialogue and close contacts would continue to resolve the issue.

Elsewhere Ms Sturgeon defended Scottish threats to Irish fishing boats around Rockall as “in line with our obligations to uphold international law”.

She called for an “amicable and negotiated settlement” to the dispute, stressing her desire to maintain good relations with the Irish Government.

The row erupted last week after Scotland threatened action if Irish vessels continue to fish in the 12-mile (19km) zone around Rockall, an outcrop in the North Atlantic.

The Scottish government said it is defending the interests of its fisheries against “illegal activity” around the uninhabited islet, over which the UK claims sovereignty.

The Irish Government does not recognise this claim over the disputed territory located around 386kms from the Scottish mainland, and Irish fishermen said they have no intention of leaving the disputed waters.

In a formal letter of notice last week, Scottish external affairs minister Fiona Hyslop warned the Irish Government that it will deploy its vessels to protect Scottish fishing rights around Rockalll.