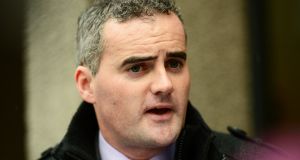 John Leahy is stepping down as leader of Renua following the party’s disappointing local election campaign.

The Offally county councillor said he would stand as an independent candidate in Laois-Offaly in the next general election.

Mr Leahy said he did not know how much of his recent local election vote had been for him and how much had been for the party, which is now left without an elected politician.

Renua ran 26 candidates in the local elections with Mr Leahy the only one to win a seat.

He said the next general election “will be my third roll of the dice. But I can’t keep rolling the dice, this will be one last big effort,” he told local radio station Midlands 103 on Tuesday.

Following the development, the eight-member board of Renua met in Dublin last night and decided to continue the party.

Renua’s national treasurer Michael Farrington said it will continue as “a conservative and pro-life” political party despite having no elected representatives.

Mr Farrington, a general election candidate in Mayo, said the resignation of Mr Leahy had long-term repercussions for Renua’s survival and that the party had set a five-year timescale to rebuild the party “with conservative ideals” for a general election.

Despite having no public representatives, Renua is in receipt of €250,000 per annum in public funding because it secured more than 2 per cent of the national vote in the 2016 general election.

“I suppose John felt after three years he not brought the party forward,” said Mr Farrington.

He said the party would continue without a leader until a suitable candidate was found.

He said most of its 26 local election candidates were keen to continue.

“Yes, we are very small and we have no political representation of any kind,” he said.

“Despite what it looks like from the outside, I can see great hope for the party over the longer period.

Many people in their 30s and 40s had joined the party on ideological grounds, he said.

“They are all pro-life and believe in conservative principles such as small government, lower taxes and a tough stance on crime.

“It will be a five-year process to build for the next election. We intend to run candidates in the next general election and will continue with our message.”

Renua was formed in 2015 after a fallout in Fine Gael over abortion. Before the 2011 general election, Fine Gael candidates promised anti-abortion campaigners that the party would not legislate for abortion.

However, the Fine Gael-Labour coalition introduced legislation to give effect to the Supreme Court’s 1992 decision in the X case, recognising a right to abortion where the mother is suicidal as a result of a pregnancy.

They came together to form Renua with Eddie Hobbs appointed as its president and financial commentator Karl Deeter as ethics officer.

The party ran 26 candidates in the 2016 general election but flopped, with Ms Creighton, Mr Timmins and Mr Flanagan all losing their Dáil seats and none of the other 23 candidates securing one.

He denied a suggestion that he was “pushed” by the national board of the party.

“I think maybe the board feels that the message is wrong and I don’t want to stand in their way. They understood my logic. The message was rejected, it hasn’t worked, they need to go in a different direction. A clean cut was needed.”

1 Close businesses selling alcohol to on-street drinkers, restaurant group says
2 Ireland is ‘weeks away’ from a second wave of coronavirus, doctor claims
3 Ryan confirms travel ‘green list’ will come in after July 20th
4 Kanye West says he will run for US president in 2020
5 FF MEP apologises for flying to Dublin for election of Taoiseach despite Covid-19 rules
Real news has value SUBSCRIBE