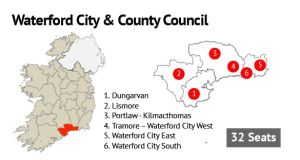 It was a bruising 15 hours at the count centre in Waterford on Sunday featuring triumphant wins and devastating losses as the 32 city and county councillors battled for their seat.

Turnout across Waterford was just over 53% and counting began at 9am on Sunday morning and continued until shortly after midnight when the final seats were filled in quick succession by the elections of Fianna Fail’s Eamon Quinlan and Sinn Fein’s Jim Griffin, who ensured the party retained their six seats.

Their success came at the expense of long time Independent councillor Blaise Hannigan, who was knocked out in the final count. Despite having over 20 years of experience, Cha O’Neill was also not safe from the guillotine, nor was Sean Reinhardt.

The first councillors across the line were from the Lismore District - Labour’s John Pratt, followed by Fianna Fáil’s James Tobin. Mayor of Waterford city and county, Cllr Declan Doocey took the third and final seat.

In Portlaw-Kilmacthomas Fine Gael’s Séanie Power and Liam Brazil sailed home in the first count after both exceeding the quota. Fianna Fáil’s John O’Leary, Sinn Féin’s Declan Clune were re-elected, while Labour’s Ger Barron regained the seat he lost during the near annihilation of his party in the last Local Elections.

Sinn Féin’s John Hearne was the only candidate to be elected in Waterford City South on the first count after exceeding the quota with 14.7% of first preference votes. Labour’s Seamus Ryan regained the seat he lost in the predominantly working class area five years ago. Independent Donal Barry along with John Cummins and Jason Murphy of Fianna Fail and Fine Gael respectively were elected.

Fianna Fail duo Eddie Mulligan and Adam Wyse were both re-elected. The Green wave was evident in Waterford with the elections of newcomers Marc O Cathasaigh and Jody Power. It came down to the wire for Sinn Fein’s Pat Fitzgerald, who fought off Fine Gael’s Sharon Carey for the final seat in the district.

Independent Councillors Joe Conway and Joe Kelly later regained their seats on the council as well as European Elections candidate Grace O’Sullivan’s sister Lola, who was the first of two women elected. The latter being Sinn Féin’s Breda Brennan.

Damien Geoghegan (FG) confidently sailed through in Dungarvan with 1,716, followed by Tom Cronin of Fianna Fáil. The final four seats were filled from candidates from Labour, Sinn Fein an Independent and former Mayor Pat Nugent.