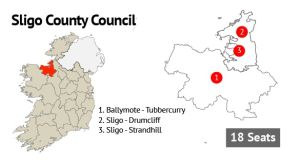 Independent councillor Joe Queenan from west Sligo said the people had decided his fate after he was re-elected to Sligo county council after securing the second highest number of first preferences in the Ballymote-Tubbercurry area.

Mr Queenan came to national attention after being interviewed by an undercover reporter on an RTÉ Investigates programme, which he described as “a sting” that had led to a difficult three-and-a-half years for him.

After a very close finish when just a handful of votes separated the last two candidates, Fine Gael was lucky to double its number of seats on Sligo county council from three to six. Fianna Fáil has dropped from seven to five seats while Sinn Féin held onto its two seats .The new 18-strong council includes four Independents and one People Before Profit councillor.

It was a tense finish as Fine Gael candidates Gerard Mullaney and Martin Connolly had to wait until 2.30am on Monday morning before being elected on the 10th count. Independent candidate Willie Gormley lost out in the keenly fought battle for the seventh seat in Ballymote-Tubbercurry LEA, coming just 27 votes behind Councillor Mullaney, who regained the seat he lost in 2014.

Mr Gormley had been hoping to succeed his aunt Margaret Gormley, who passed away last month and had served on the council for 40 years following in the footsteps of her father who was first elected in 1942.

Mr Queenan was recently censured by his colleagues on Sligo county council after the Standards in Public Office (SIPO) Commission made a number of findings against him. He said he was “humbled and honoured” to have got a mandate from the people of west Sligo.

The former Fianna Fáil councillor, who resigned from the party in the wake of the controversy, said he had stated at the time the people would decide his fate and that is what had happened in this election. To loud cheers from his supporters he said “I respect democracy – democracy has made a statement here”.

Mr Queenan noted that Fianna Fáil had not run a candidate against him in west Sligo. Asked whether he would be returning to the party , he said he would be talking to a number of people before this was decided.

Outgoing Cathaoirleach Martin Baker of Fianna Fáil held onto his seat getting elected on the 10th count.

Meanwhile it is unclear whether any candidate will challenge the outcome in Sligo following a recent complaint to gardaí by Fine Gael headquarters about alleged electoral fraud.

Sligo county council has confirmed that it is aware that a formal complaint has been made to the gardaí in relation to the high number of postal voters registered for people with a disability or physical illness.

“We will assist the gardaí with any enquiries, and will furnish any material documents in our possession to them,” the council said in a statement.

The council pointed out that there is legal provision to question the outcome of a local election by way of a petition in the Circuit Court within 28 days of the declaration of the result.

It is now considered unlikely that Fine Gael will challenge the outcome having secured six seats but that option is available to any candidate.

A tally of the postal votes conducted at the count suggested there were 310.