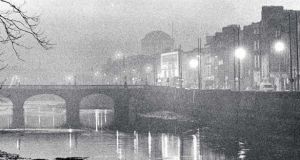 A file image from 1988 showing smog over Capel Street bridge on the river Liffey, with the Four Courts in the background. Photograph: Matt Kavanagh / THE IRISH TIMES

The introduction of a nationwide ban on smoky coal has been delayed because of the threat of legal action by coal firms and the need to have a “legally robust plan” in place, the Dáil has heard.

He told Fianna Fáil leader Micheál Martin “a number of coal firms have indicated that they intend to challenge the introduction nationwide of a smoky coal ban”, which is Government policy.

He said the coal firms warned if the Government attempted to extend the smoky coal ban they would challenge the new ban as well as the exiting ban and would argue that other equally polluting fuels should be banned, including peat and wood.

The Taoiseachsaid if such legal actions were successful “not only will we fail to go forward, we may even end up going backwards.

The ban on smoky fuels was introduced almost 30 years ago by then minister Mary Harney and covers 80 per cent of the State.

Mr Martin questioned the failure of Fine Gael-led governments in the last eight years to extend the smoky coal ban to the remaining 20 per cent of the State.

Mr Martin pointed to a report in The Irish Times about the Clean Air Alliance made up of eminent environmental scientists, that air pollution was killing four people every day in Ireland.

He said one academic cited Enniscorthy, Longford town and Roscommon, as among places where air pollution was now lethal and 20 per cent above levels in Dublin and Cork.

One academic said “Enniscorthy risked becoming the New Delhi of Ireland” because of air pollution.

He said in 1990 Ms Harney as minister of state for environment faced down opposition to bring in a smoky coal ban for Dublin which was later extended to other places.

“It saved many lives and improved the health of very many people,” Mr Martin told the Dáil.

“Why is it that the lives and health of people living in Enniscorthy and Longford are not as important as those of people in other places?” Mr Martin asked the Taoiseach.

Mr Varadkar said Minister for Environment Richard Bruton received advice from the Attorney General and was “determined to reduce levels of harmful emissions in residential heating and is finalising a legally robust plan which will improve air quality particular in our cities and towns”.

But he said “we don’t want a law of unintended consequences”.

He said banning smoky coal ban would be positive but said it had been an error by previous governments to encourage people to buy diesel cars.

Mr Martin described the Taoiseach’s response as “pathetic” and said the ban on smoking would not have happened had they given in to legal threats.

The Fianna Fail leader said the ban was first introduced almost 30 years ago and since 2015 previous ministers had pledged to ban smoky coal by 2018 but the Government had stalled on this.

The Taoiseach said they had to give the issue “full and due consideration”. He said he was “sorry if you’re angry and upset once again but the answer I’m giving you is the honest one that we have to give due and full consideration to this”

He said Wexford County Council had recently voted unanimously to ask the Minister to extend the smoky coal ban to Enniscorthy.

The Taoiseach said the local authority had the power itself under existing legislation to begin the process to ban smoky coal in the town.