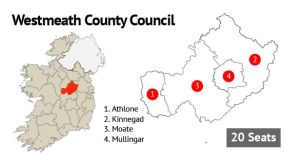 The outcome in Westmeath was always going to be difficult to call, but not even the sharpest pundits would have predicted the arrival into the 20-seat council chamber of two Green candidates.

The final shake-up sees nine Fianna Fáil councillors, five Fine Gael, two each for the Green Party and Labour and two Independents, one of whom, Jamie Moran, is the 21-year-old son of TD Kevin “Boxer” Moran.

Early in the day, Green candidate Hazel Smyth spoke bravely of how she had at least paved the way for future growth. Even she was stunned when she learned she was in the running. Party colleague Louise Heavin had to wait for the final count of the entire Westmeath election to have her seat confirmed.

Significant was the elimination of Sinn Féin’s Sorca Clarke, already the party’s nominee for the Longford-Westmeath constituency in the next general election. Ms Clarke was Sinn Féin’s sole remaining councillor out of the three the party returned in 2014. The two councillors returned with her in 2014, Una D’Arcy and Paul Hogan, both resigned from SF and ran as Independents, but failed to retain their seats.

Another councillor who lost his seat was Fianna Fáil’s Brian Crum, who did exceptionally well despite the fact that the boundary changes did not suit him and he could not vote for himself. Also blaming the boundary changes was Independent Michael O’Brien, who ran in both the Moate and Athlone LEAs, but failed to retain his seat.

Fine Gael will be disappointed that their candidate Gerry Heery had his route to the chamber thwarted by the Green Party’s success but Fianna Fáil was exultant over its success in gaining a seat.