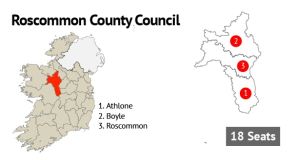 Roscommon once again showed its tendency for political unpredictability as nine Independent councillors were elected in the county’s three, six-seat electoral areas. The results represents an increase of three seats for Independents candidates since the elections of five years ago.

Though Fianna Fáil saw a reduction in its number of seats from eight to six seats, the party produced a stunning performance to win three of the six available seats in the Roscommon Municipal District, securing 2.94 quotas or 41.96% of the vote, an increase of 7.87% on its vote five years ago.

Fianna Fáil’s strong showing in the Roscommon area was tempered somewhat by their failure to secure a second seat in the Athlone area, where no less than four Independents were elected, two of whom enjoyed previous links with the party.

Two of the party’s candidates Boyle Town candidate John Cummins and Castlerea Town based candidate Paschal Fitzmaurice both topped the poll in their respective Boyle and Roscommon Municipal areas with Independent Tony Ward, securing most first preferences in the Athlone Municipal District.

Fine Gael endured a disappointing day. The party lost one of their seats to now hold two seats in the new Council chamber. Overall, the party’s vote slipped to 16.23% from its showing of 22.42% at the last election. The party will be represented by Cllr. John Naughten, a brother of former Minister, Deputy Denis Naughten and sitting Cllr. Liam Callaghan.

Most disappointing for Fine Gael was the party’s failure to win a seat in the Roscommon electoral where the party’s vote dropped by 12%. The party’s sole candidate, Granlahan based Auctioneer Gerry Coffey, failed to retain the seat, previously held by outgoing Cllr. Michael Creaton.

The Sinn Fein party vote also dropped marginally. The party had hoped to win three seats, a seat in each of the county’s electoral areas, but had to settle for sitting Councillor Michael Mulligan from Ballaghaderreen retain his seat with an increased vote in the Boyle Municipal District.