All 40 candidates announced with strong peformances for FF, FG and SF 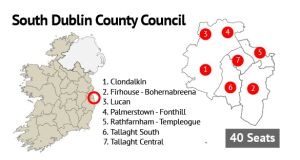 The Sinn Féin candidate was elected for Tallaght South on the sixth count. Speaking to reporters in Citywest earlier Mr Holohan promised to hold fellow councillors who made tackling antisocial behaviour in their areas central to their campaigns to account.

He said one thing he had learned from his months of campaigning was the politics can be a dirtier game than MMA. Drawing less than favourable comparisons between his previous life and his future one, the Sinn Féin candidate said that “people give MMA a bad time but they want to check out politics”.

He told The Irish Times that in MMA “when they come at you, you know what they are trying to do. Over here, they come at you smiling and you have to be very careful in this game and I am learning that.”

Fianna Fáil’s Charlie O’Connor was the first to be elected to South Dublin County Council. The veteran councillor who has been involved in public representation since 1991 said it was the first time he had exceeded the quota on the first count in Tallaght Central.

The election was also notable for the success of Baby Pereppadan who suffered racial abuse during the campaign, with some voters in his Tallaght South constituency telling him to “go home” and labelling him a “bloody Pakistani”, even though he is Indian by birth. The Fine Gael representative was elected on the eight count.

Paul Nicholas Gogarty a musical performer and former TD for the Dublin Mid-West constituency from 2002 to 2011 caused some minor confusion among count followers as he stood in both the Lucan and Palmerstown-Fonthill local election alrea. Mr Gogarty was elected for Lucan which he has represented since May 2014.

In Clondalkin, Independent Eoin Ó Broin, not the Sinn Féin TD he bears a passing resemblance to, was elected on the sixth count.

For Labour it was a bad election and in South Dublin County Council Pamela Kearns was its first candidate to be elected, late on Sunday night. Ms Kearns was elected to the Rathfarnham-Templeogue local electoral area at about 8pm. Johanna Tuffy was elected for the party just before 9pm representing Lucan.

The Social Democrats were disappointed by Rob Hunter losing out by less than 30 votes for the last seat in the five-seat Firhouse-Bohernabreena area.

However, there was a tonic for them in Rathfarnham-Templeogue with Carly Bailey taking a seat on the ninth count. Fine Gael’s David McManus and Mary Seery-Kearney and Fianna Fáil’s Yvonne Collins took the final three seats on the council.