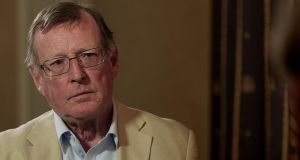 The former first minister of Northern Ireland David Trimble has said he was “forced” to change his view of same-sex marriage after his daughter married her girlfriend.

Vicky Trimble married Rosalind Stephens at a ceremony in Scotland in November, 2017.

As leader of the Ulster Unionist Party, Mr Trimble frequently voted against moves to liberalise marriage rules when he was an MP.

However, speaking in the House of Lords last week he described both abortion and same-sex marriage as “delicate matters”.

“I have found myself taking a particular position with regard to same-sex marriage, which was forced upon me when my elder daughter got married to her girlfriend,” he said.

“I cannot change that, and I cannot now go around saying that I am opposed to it because I acquiesced to it. There we are,” he added.

In a Facebook post soon after her father made his comments, Ms Trimble said she had been “a little surprised” by what he had said.

“I wondered when or if this would be picked up on,” she wrote. “I’m a little surprised at Dad’s wording as he has been supportive of our relationship ever since he encountered Rosalind Stephens coming out of the bathroom wrapped in a duvet.”

Speaking to a Sunday newspaper Ms Trimble elaborated. She said “a lot of people who think they are against same-sex marriage may never have encountered someone who is gay.”

She added that her father had been against same-sex partnerships “and now he has had that personal experience, he realises it is just like any other relationship.”