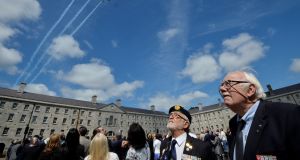 Herve Olivieri and Jaques Mention, veterans of the Algerian and Tunisian war, watch as the Aer Corps performs a flyover. Photograph: Alan Betson

President Michael D Higgins and Taoiseach Leo Varadkar led commemorations at a State event in Dublin to Irish men and women who died in wars and while serving with the United Nations.

The National Day of Commemoration, which has been marked since 1986, was observed with events around the country. The President and Taoiseach attended a commemoration at Collins Barracks in Dublin.

The event was also attended by Government ministers; the Council of State; the diplomatic corps; the judiciary; and representatives from Northern Ireland.

Representatives of the Christian, Islamic, Jewish, Buddhist, and Hindu faiths each led an act of commemoration followed by a reflection from the Humanist Association of Ireland.

Mr Higgins laid a wreath on behalf of the people of Ireland at the ceremony and inspected a guard of honour formed by members of the Defence Forces. Three Irish Air Corps aircraft performed a flyby.

Retired Irish and Irish-resident military personnel, including those who served in the British, French and US military, and who fought in foreign wars, were in attendance.

“We were in a war of independence 100 years ago that has allowed this State to come to the level of maturity where it can now look back at all wars and men and women of our militaries who died in those wars,” Defence Forces chief of staff Vice Admiral Mark Mellett said.

Among those at the event were John Fox from Co Clare, who said his grandfather and namesake was the only man to serve in the first World War who won an all-Ireland hurling medal. He was on Clare’s 1914 winning team and enlisted the following year as a supporter of Irish Parliamentary Party leader John Redmond.

“For a long time, the Irish people who fought in World War One in particular were pushed into the background and slightly airbrushed out of history. We have got past all of that now. It was a wonderful opportunity to remember him,” said Mr Fox, wearing his grandfather’s military service medal on his lapel.

Englishman Graham Chipperfield, who served with the British Army in Northern Ireland in the 1970s, and now lives in Belfast, also attended.

“If 40 years ago, when I was happily strolling down the Shankill Road with a beret and a rifle in my head, somebody said to me: ‘Forty years from now, you’ll be in Dublin wearing your medals,’ I would have said: ‘You need your head examined.’ But the fact that we can do it is fantastic,” he said.

Some veterans of Irish UN peacekeeping missions questioned the Government commemorating the military sacrifices of the past while current Defence Forces personnel, they said, endured poor pay and conditions.

“It is very bad the way the Government has treated them. They are not getting respect but they still want them to do UN jobs,” said Dubliner Christy Flynn, a veteran of four tours in Lebanon in the 1980s and 1990s.

Pat McGarry from Tipperary, who served seven peacekeeping tours in Lebanon and Cyprus, said the Government had only restored in its pay offer what they had taken from them since the crash.

“They are here honouring vets today. There are other ways that they could honour them, the right way, by looking after them,” he said.