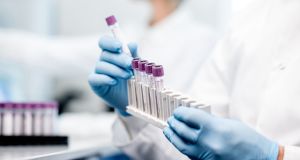 Screening results were either delayed or not issued to 800 women and their GPs because of an IT issue at a US laboratory, Quest Diagnostics in Chantilly, Virginia. File photograph: Getty

Minister for Health Simon Harris has said he learned only last week of the computer glitch that resulted in hundreds of women not receiving results of repeat cervical screening tests.

As it emerged over the weekend the Health Service Executive was informed of the issue in February, and the Department of Health has known since late June, there were calls for the Minister to clarify when he became aware.

Screening results were either delayed or not issued to 800 women and their GPs because of an IT issue at a US laboratory, Quest Diagnostics in Chantilly, Virginia.

Labour health spokesman Alan Kellysaid there were still many inconsistencies in “who knew what and when from the Minister right through the Department of Health and the HSE”.

But a spokeswoman for the Minister said he was informed of the matter “on the evening of July 10th” as soon as the HSE had completed a report to Mr Harris on the issue.

The issue first came to the department’s attention after a woman wrote to Mr Harris querying the delay in her receiving her results.

The spokeswoman said: “The letter was acknowledged immediately and the issue was followed up subsequently with the HSE. The department became aware of the existence of an IT issue through information supplied by the HSE on June 25th in relation to this individual’s results.

“The department immediately engaged with the HSE to seek clarity about what the issue was, its possible impact and how it was being resolved.”

She continued: “This report was received on July 10th and it advised of the nature of the issue, and that work was ongoing to resolve the IT issue and ensure all results letters issued. The Minister was informed of the matter on the evening of July 10th.”

As director general of the HSE Paul Reid initiated a rapid review of the communications failure, Opposition parties called for an independent inquiry. And patient groups demanded to know why they were not informed until just before it was made public.

Sinn Féin spokeswoman on health Louise O’Reilly said the incident had served to show there was a failure in the policy of open disclosure that was meant to have been introduced on foot of the recommendations of the Scally report.

Ms O’Reilly told RTÉ’s This Week programme there was a need to “escalate the process” of repatriating cervical check screening to Ireland. She also called for an outside independent inquiry.

On the same programme, Stephen Teap, whose wife died from cervical cancer two years ago, queried why the department had not informed patient representatives on the CervicalCheck steering committee as soon as it found out.

‘Who was this not raised at committee’?

The department said it found out on June 25th. Mr Teap said he and another patient representative, Lorraine Walsh, attended a committee meeting the following day, June 26th, but were not informed.

“Why was this not this raised at the steering committee and why were we not told?” he asked.

“We thought we were getting to the stage where we were building a good relationship with the HSE,” he said.

Mr Kelly questioned why the Minister had been informed only last week, when his department was aware of the problem in June. He said the accounts given of the issue, and the response of authorities to it, were inconsistent.

“Why did the HSE remain silent on the issue, despite knowing the scale of the problem and why do they keep changing their time lines on what they knew and when they knew? Why did they treat the patient advocates with such disrespect?,” he asked.